How much of Wales can we bring to you as you read this — probably sitting at home in front of your computer or your smartphone? Quite a lot, we hope. We’d like to introduce you to some typically Welsh traditions and the wonderfully lyrical Welsh language.

If you would like to read more about Wales, join us on a walking tour of the beautiful Brecon Beacons National Park in issue 6/20 of Spotlight magazine.

The sound of Wales

Welshmen like to sing, and as anyone who has been to a rugby match in Wales will tell you, they do it very well — in and outside the stadium. Some of those magnificentgroßartig, prächtigmagnificent singers are members of a male voice choirChorchoir, a cornerstoneGrundstein, Eckpfeilercornerstone of Welsh musical tradition. “The sound we make as Welsh choirs is the sound of the soul of the nation,” says Chris Evans, second tenor and secretary of Beaufort Male Choir and secretary of the Welsh Association of Male Choirs, which has 105 members worldwide.

Evans was persuaded to join Beaufort Male Choir after singing in a community choir at the National Eisteddfod (a Welsh festival of literature, music and performance). “The man next to me was the chairman of Beaufort choir and told me I had no choice — I had to join the choir!”

The magic of the music still moves Evans. “We might be singing in a practice when all of a sudden, the hairs on the back of my neck rise and I think, did we really make that lovely noise?”

The choir has changed over the years. “We’re no longer in grey trousers and blazers. We wear three-piece, flashyschick, auffallendflashy designer suits. We’ve changed the repertoire and sing hits by Ed Sheeran, as well as all-time favourites, like ‘Myfanwy’.”

The tradition of male choirs began during the Industrial Revolution. After a hard day down the mines, men would walk home singing the soul-stirringherzergreifendsoul-stirring hymns of the Nonconformist chapels. Or they sang at their local miners’ institutes, meeting halls paid for by the miners out of a communal fund.

The mines may have closed, but the singing keeps their memory alive. Beaufort Male Choir has recorded the album Every Valley with a band called Public Service Broadcasting. The songs reflect on coal mining and the impactAuswirkung(en)impact of mine closures on South Wales. You can listen to Beaufort Male Choir on their website — and enjoy some singing Welsh rugby fans with this video:

A view of Wales

Even after 19 years of living and working in Brecon Beacons National Park, area wardenGebiets-, Parkauf­seher(in)area warden Jon Pimm is still surprised by some of the views. “Only yesterday, while driving back to the office, the way the light was hitting the Black Mountains was superb.”

Pimm’s work is varied and can change at short notice. “I could be giving advice to visitors, measuring a bridge that needs replacing, managing contractorBauunternehmer(in)contractors who are doing work for us, supervising a film shoot or installing a gate on a public right of way.”

And it’s a job Pimm to appreciateschätzenappreciates, for it allows him to live and work in a beautiful part of the world — and he’s paid to go out and enjoy it every day. What’s more, he’s happy his job allows him to share the stunningatemberaubendstunning landscape with visitors. 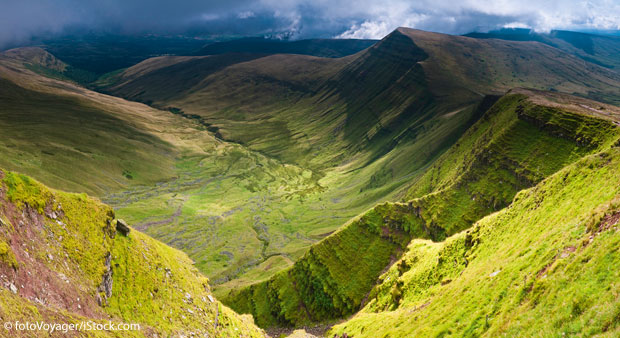 “The wildlife here is amazing. Sit still for a few minutes in the right place and you may be lucky enough to see a red kiteRoter Milanred kite to soarin die Höhe steigensoaring overhead or hear a skylarkLercheskylark to chirpzwitschernchirping away quite merrily.” Then there are the sheep and Welsh mountain ponies, which move freely, keeping the vegetation in to keep in checkunter Kontrolle haltencheck.

Pimm has always loved the outdoors. As a child, he was often taken for walks and on camping trips, and his stepfather worked for a while as a National Trust warden. After studying land use and recreation at college, Pimm was lucky enough to get a paid summer job with Northumberland Park Authority. “I think this was the lucky breakGlücksfalllucky break that gave me the experience that led on to other warden and ranger jobs and finally got me where I am today.”

For Pimm, it’s the dramatic landscape and changing weather that make the Brecon Beacons so special. He loves the entiregesamt, ganzentire area but admits to having a favourite place: Mynydd Illtud Common, close to the village of Libanus. “On a clear day, you can see the four main hill ranges that make up the park, and the view is dominated by the flat peakGipfelpeak of Pen y Fan. It’s also close to our visitors’ centre, so it’s convenientgünstig, praktischconvenient to get a cup of tea and a piece of cake!”

For live webcams of the area, go to the Mountain Centre Visitor Centre webcam.

A taste of Wales

From the CityLondoner FinanzviertelCity to cheese? Maybe not the most obvious step for some, but for Tom Lewis, it was one that made perfect sense. After growing up in the historic Welsh town of Monmouth, Lewis tried life in London for about six years. “I worked in the City but was very average at my job,” he says. Lewis realized his heart wasn’t in the job or in London; he was ready to return to Wales.

The next step was to decide which new career to try. “I drew up a shortlist of all the things I was interested in: rugby, history and cheese. Having worked out that I was never going to play rugby for Wales and that archaeology wasn’t the same as Indiana Jones, I thought that cheese might be the way to go.”

Lewis opened a delicatessen — The Marches — in his home town of Monmouth. The shop specializes in local artisanhandwerklichartisan produceErzeugnisseproduce from both sides of the Welsh–English border. “Everything from the charcuterie to the beer to the gin to the chocolate is locally produced. Even the coffee is roasted just two miles away. The more local the better.” 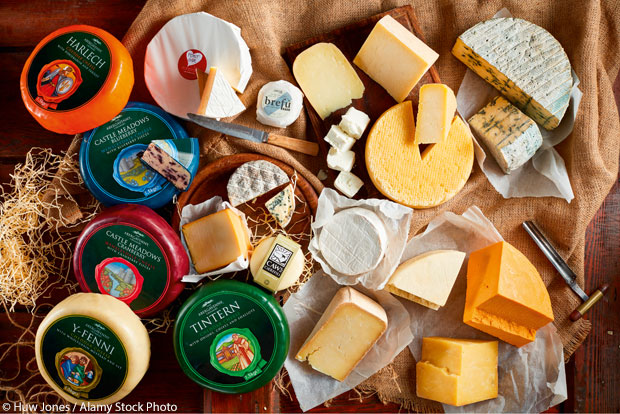 Let’s not forget the spectacular variety of cheeses made by farmers in the region. Along with the local gin, they’re Lewis’s bestselling produce. His favourite is Cel­tic Promise, an unpasteurized, semi-soft cheese he describes as “very punchykräftigpunchy with a nice full flavour — a stunnerWucht, Kracherstunner”.

In addition to selling delicious hamperGeschenkkorb, Esskorbhampers, running a courier service and a home-delivery service, Lewis supplies cheeses to local Michelin-starred restaurants. He also runs a coffee shop at the back of the delicatessen; its lunch menus, cakes, cheeses, meats and chutneys reflect the produce sold in the shop.

Take a look at The Marches produce on their website.

How good is your Welsh?

You couldn’t get a better sense of Wales than by listening to the musical cadenceTonfall, Kadenzcadences of the Welsh language. Here’s the opening paragraph of our Travel story on page 30, first in English and then in Welsh for you to compare:

The medievalmittelalterlichmedieval town of Abergavenny lies only 10 kilometres beyondjenseitsbeyond the English border, earning it the title “The Gateway to Wales”. The surrounding area is rich in history, myths and legends — and it is beautiful. Located within the Brecon Beacons National Park and with the dramatic Black Mountains rising up in the background, it’s small wonder that Abergavenny acts as a mecca for walkers.