It’s not just raining on my arrival in Waterford, it’s also blowing a galeSturmgale for good for good measureobendreinmeasure. Just the sort of weather you might expect from a place whose name comes from the old Norse for “windy fjord”.

Thanks to its Viking forefatherVorfahr, Ahnforefathers, Waterford is Ireland’s oldest city. Lo­cated around 170 kilometres from Dublin and about 24 kilometres from Ireland’s south-east coast, it’s now home to 50,000 people. In 914, Vikings from Norway chose this protected spot on the River Suir as an easily defendable settlement site for a longphort, or “ship camp”. Today, more than 1,000 years later, Waterford is one of Ireland’s best-loved tourist destinations — for good reason.

For more than two centuries, Waterford was world-famous as a centre for the production of high-quality crystal glass. When the company closed in 2009, it was a big loss not only to the city’s economy, but also to its prestige. The crystal connection is not forgotten, however, and visitors to the House of Waterford Crystal can see artisanKunsthandwerker(in)artisans at work from the design stage onward. They use traditional glass-blowing techniques to make vases and jugKrug, Kannejugs, and then finish them with complex engravingGravur, Gravierungengravings.

The House of Waterford Crystal lies in the city’s main tourist district, now known as the “Viking Triangle”. It’s a riverside area that was once surrounded by the original 10th-century Viking-era city walls. The triangle refers to three sites: Reginald’s Tower, the medievalmittelalterlichMedieval Museum and the Bishop’s Palace. 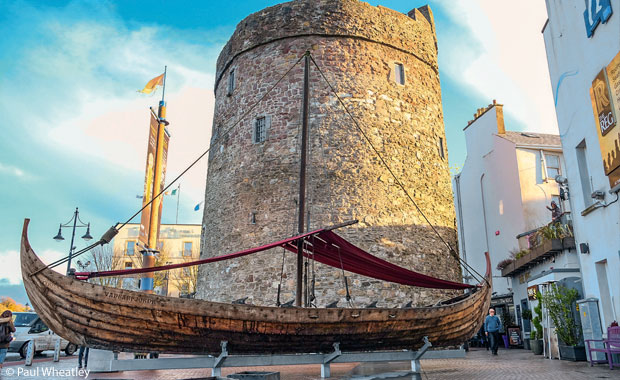 I’m a bit sceptical at first about the idea of “Viking Waterford”. Yes, Vikings settled here, just as they did in areas of Iceland, Britain, Italy, Turkey and elsewhere. The Viking Age began in 790, when the earliest raidÜberfall, Raubzugraids — attacks on coastal Irish monasteryKlostermonasteries, the taking of slaves — are known to have occurred. By around 840, their longboats had made it inland on the major river systems and the Vikings were able to build bases. The era ended in 1066 with the NormannormannischNorman conquestEroberungconquest of England. For 300 years, the Vikings had been a truly international force. By the end of the 11th century, the kingdoms of Denmark, Sweden and Norway had begun to take shape, and the societies that had produced the Vikings were changing in fundamental ways.

In 2012, the Irish government gave Waterford €1.9 million to upgrade the Viking Triangle. My early impressions are that it’s money well spent — and not only because of all the publicity connected to the big-budget TV series Vikings, which tells the tale of Ragnar Lothbrok, a fictitious Viking hero. Filming of the series for the History Channel began that same year at Ireland’s own Ashford Studios, an hour south of Dublin. One of the Triangle highlights is Reginald’s Tower, a 16.5-metre-high, circular Anglo-Norman structure built in the 12th or 13th century on top of a Viking fort. It’s thought to be named after Ragnall, a Viking king of the settlement, and is home to the city’s Viking treasureSchatz, Kostbarkeittreasures.

Ireland’s Viking past — like much of Viking history itself — is murkydüster; hier: unergründlich, unklarmurky and complex. What seems to be uncontestedunbestrittenuncontested, though, is the establishment of Water­­­ford as a port for NorseAltnordischNorse seamen. The Viking kings of Waterford ruled until 1170, when they were to unseatabsetzenunseated by the Cambro-Normans — that is to say, Anglo- Normans who had settled in the south of Wales after 1066 (“Cambrian” means “Welsh”). In 1171, King Henry II of England set foot in Waterford, making the change of leadership official.

Over the centuries, explains curator Donnchadh O’Ceallachain, Reginald’s Tower was used as part of the city’s defences, then as a prison and today serves as a riverside museum of Viking history and culture. to displayausstellen, zeigenDisplayed across three floors are Viking warrior weapons found in Woodstown, about five kilometres from Waterford and an important archaeological site, as well as artefacts found in Waterford itself, such as wood and bone pieces belonging to a board game — hnefatafl, which in Old Norse means “fistFaustfist table” and is similar to chessSchachchess — and a silver-and-gold broochBroschebrooch described as “the finest piece of 12th-century secular metal­work ever found in Ireland”.

Outside, just metres from the River Suir running through the city, is a modern masterwork: a fantastic, full-size replicaNachbildungreplica of a Viking longboat, complete with red canvas sails attached to a wooden mast. Made from Irish oakEiche, Eichenholzoak, it was built by a professional shipwrightSchiffsbauershipwright and a team of unemployed men as part of a city project to provide the three “Waterford Treasures” museums with a proper replica. It’s modelled on Viking ships found at Roskilde, Denmark, one of which was built with wood from Ireland. My initialAnfangs-initial fears of Viking Waterford as a merebloß, reinmere branding exercise are disappearing fast.