The Cotswolds, with their rolling hillsHügellandschaftrolling hills, quiet meadowWiesemeadows and attractive villages, seem like the very definition of ruralländlichrural England. More than 50 years ago, this region of south-central England was to designateausweisendesignated an Area of outstandingaußergewöhnlichOutstanding Natural Beauty, to spanumfassen, umspannenspanning six counties and attracting 38 million day visitors each year. It’s also a hotbedfruchtbarer Boden, Quellehotbed of creativity, home to writers, artists, performers and crafterKunsthandwerker(in)crafters who take inspiration from these beautiful surroundings.

This is landscape that has been shaped by the success of the wool trade — once a successful industry here in the Cotswolds — and my journey into the Stroud valleys to revealerkennen lassenreveals many former woollen cloth millWollstofffabrikwoollen cloth mills. Only a couple of mills here are still producing cloth, while many others have become homes, work spaces or places to shop and eat. Some, like Dunkirk Mill in Nailsworth, have been to preserveerhaltenpreserved and are open to visitors at certain times of the year, with working demonstrations from the historic machinery offering a fascinating glimpseEinblickglimpse of the past. 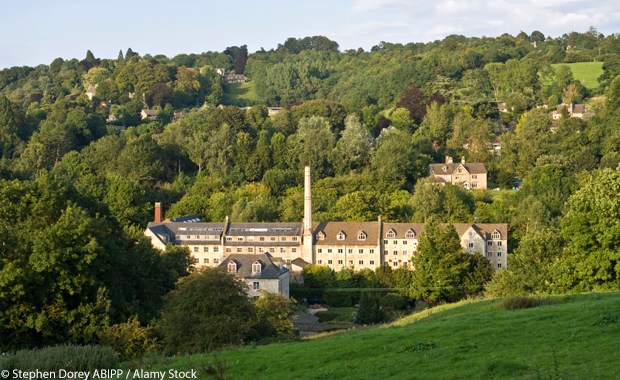 Dunkirk Mill, where wool was once produced, near the Cotswolds town of Nailsworth

Today, there are Cotswolds artists and crafters specializing in textiles, and I’m going to the village of Amberley outside Stroud to meet one of them. Susie Hetherington works from her home, where the countryside stretches out from her back garden. She tells me it is a huge sourceQuellesource of inspiration for her designs.

“Our little village is on National Trust common landGemeindelandcommon land, so we have free-roamingfreilaufendfree-roaming cows. It’s a really special place,” she says. “We bought this house for its view, and that really has inspired me to draw. The hills here — they call it the Five Valleys — are like cliffs. There’s a walk just down the road that we describe as the headlandLandzungeheadland. It feels as if you’re going around the corner off a cliff looking out to sea. But you’re not; you’re looking out to a beautiful valley. That was really alluringfaszinierendalluring to me.”

Once a graphic designer by tradevon Berufby trade, Susie changed the direction of her career after having her three daughters. She found herself photographing and drawing the nature near her home, while her children were to napschlummern, ein Nickerchen machennapping in the pushchair (UK)Kinderwagen, Buggypushchair or car.

“I didn’t know what I was doing with these things,” she says. “It wasn’t work-based, it was just something to kill some time to get me through motherhood.” Inspired and encouraged by ­Dorset-based designer Cameron Short, she eventuallyschließlicheventually decided to try lino printingLinoldrucklino printing.

“It was basically me taking one of those first drawings — I think it was of a bird and a plant from my garden — and then working out a repeat,” she says. “I was quite pleased with it, to carveeinritzen, schneidencarved it into lino, and Cameron said all the right things, which was just what I needed. It went from there. I lino printed in my kitchen on the floor, standing on my block. This was all while the children were in bed, so late at night I couldn’t see what I was doing,” she laughs.

Now Susie’s fascinating patternMusterpatterns — based on the nature on her doorstep — can be found on fabricStofffabrics, cushionKissencushions, lampshadeLampenschirmlampshades, tea towel (UK)Geschirrtuchtea towels and much more. They are even on the packaging of local organic-soap company Soap Folk, a collaboration that is typical of the Cotswolds, where crafts­people commonly work together and support each other.

“When we came here, I didn’t to anticipateerwarten, ahnenanticipate the creative industry that was going on all round these Five Valleys,” she says. “There’s this big textiles past and great organizations like Stroud International Textiles. Lots of people come here to do talks, and there are the open studios trailPfad, Wegtrails.”

As a small market town, Stroud is a good size for making connections with fellow artists. Susie says there is a high concentration of artists here, and that it is easy to to collaboratezusammenarbeitencollaborate with people, thanks to “a sort of like-mindednessGleichgesinntheitlike-mindedness — it’s quite an arty, bohemianunkonventionellbohemian vibe (ifml.)Atmosphäre, Schwingungvibe”. She has tapped into the creative vibe in her village, which brings together artists, sculptorBildhauer(in)sculptors, designers, jewellery makers and more. 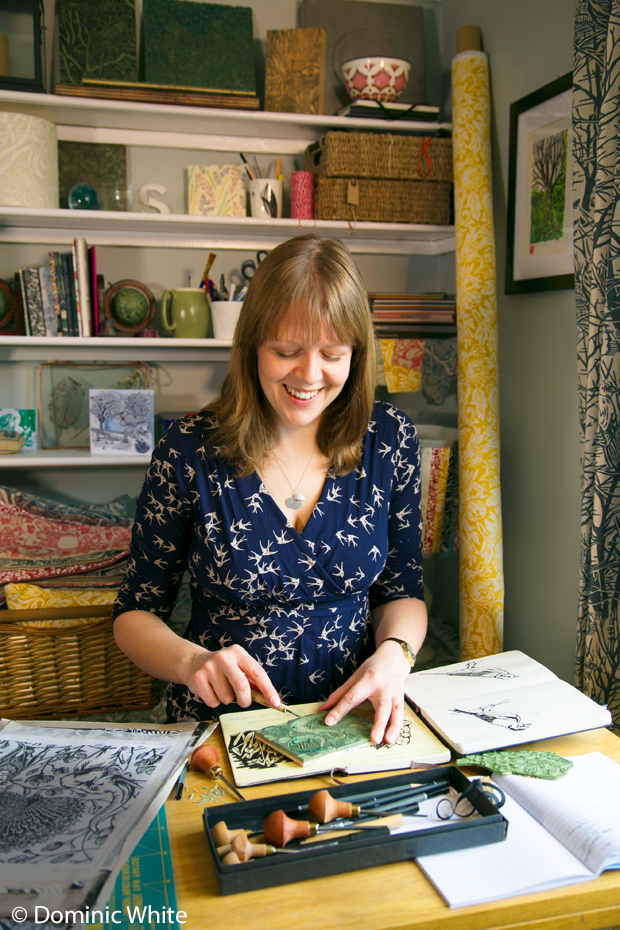 “A couple of years ago, I had a conversation with some friends about starting our own little collective(Produktions-)Gemeinschaftcollective,” she says. “When we began, everybody was in the village, so we called ourselves the Amberley artisanKunsthandwerker(in)Artisans, and it covers a real mix of creative people.”

Living in a spot of such rich natural beauty, she says the inspiration and designs never run out: “I can’t leave the house without seeing something I want to photograph and draw. My children go to the village school, so we walk, and it’s a daily thing. There just aren’t enough hours in the day to design with them.”

Find out more about Susie Hetherington’s work on her website.