“Lucy, dear, you need to get up,” she to whisperflüsternwhispered. “But don’t wake the children…” Trotsky, who always slept upstairs when Lucy’s husband, Klaus Tischler, was away on business, to wag one’s tailmit dem Schwanz wedelnwagged his tail at Dorothy, then to settle downhier: sich hinlegensettled down again with a sighSeufzensigh. Lucy to squintblinzelnsquinted at the clock next to her bed.

“What’s the matter, Aunt Dot?” she asked, to yawngähnenyawning. “It’s two o’clock in the morning.”

“There’s an elderlyälterelderly gentleman wearing a beretBaskenmützeberet sitting in the armchair next to the fire in the sitting room,” said Dorothy. Lucy sat up, now wide awake.

“A beret? Oh, dear. That’ll be Klaus’s Uncle Peter. He’s a bit eccentric. He sometimes just to turn up (ifml.)auftauchenturns up here, though not normally this late. This was his house, you see, so he has a key to everything. I’d better go and make sure he’s all right and then phone his home to say he’s safe. He has a live-in nurse24-Stunden-Pfleger(in)live-in nurse, you see.”

Uncle Peter was buried a week later in the Tischler family grave, just above his parents and next to his brother. Lucy stood with Klaus and the rest of the close family at the front, while Dorothy stayed at the back with her friend from the village, Armin von Weiden, and learned about the relatives.

“Peter was a bachelorJunggesellebachelor,” Armin told her quietly. “But his brother, Fritz — Klaus’s father — and his sisters all had children.”

“Lucy and Klaus don’t talk about them much. Is there a reason?” asked Dorothy.

“Fritz was close to Peter, but not to the sisters, Gertrude and Evangelina. Gertrude — she’s the one with the dyedgefärbtdyed blonde hair — married a Herr Grüber, who worked for a pharmaceutical company, and they spent a lot of time in America. They came back to Germany when he retired, but then he died shortly afterwards. Klaus said Herr Grüber’s heart just gave up when he realized he was going to be spending all his time with Gertrude.”

“Living in Houston. apparentlyanscheinendApparently, they barelykaumbarely speak German any more.”

“She’s standing next to Gertrude. She was an English teacher — not a very good one — at a Gymnasium in Speyer and is married to Herr Steinherz, who worked for the tax office. They have two children, who must be in their late thirties now. I once had to rescue Klaus from them when they were small, at some family party of Peter’s. They’d locked him in a wooden crateHolzkistewooden crate with wheels and were about to push it down a hill.”

“Poor Klaus! No wonder he…” but then Dorothy had to stop because the vicar, Frau Apfelbaum, had begun the service.

Afterwards, Lucy and Klaus provided food for everybody at their house. At some point, Dorothy found herself in a corner with the two sisters. How very different they were. Gertrude was tall and thin and to peer down at sb.von oben auf jmdn. herunterstarrenpeered down at people like a storkStorchstork hunting for frogs around her feet. Evangelina was short and round, and Dorothy suspected that she wore a wigPerückewig. Her black suit was at least two sizes too small for her.

“You’re Lucy’s aunt, then?” asked Gertrude as she removed a bit of lettuceKopfsalat; hier: Salatblattlettuce caught between her teeth with a long fingernail.

“Where are your manners, Gertrude?” interrupted Evangelina. “You must introduce yourself and shake the hands. So you do it in England!” She to transferhier: ablegentransferred the chicken leg she’d been holding to her plate and offered her hand. “Miss Winslow, can I me introduce, Evangelina Steinherz, and that is my sister Gertrude Grüber. How do you do?”

“How do you do?” answered Dorothy, shaking Gertrude’s stickyklebrigsticky hand. “Please, call me Dorothy.”

“So, you were the one who found poor Peter, then. How did that happen?” asked Gertrude.

“I couldn’t sleep,” said Dorothy. “So, I came downstairs to make some cocoa and found Mr Tischler sitting in the chair opposite the secretaire.”

“She means Peter’s old writing desk,” explained Gertrude, pointing out the piece of furniture on the other side of the room. “The one he gave to Lucy when she and Klaus got married.”

“Oh, yes!” said Evangelina, and Dorothy noticed a small frownStirnrunzelnfrown appear. “The Biedermeier piece of our mother’s. Most generousgroßzügiggenerous of Peter.” She pressed her lips together as if to stop herself saying anything else.

“Well, I said ‘hello’, but he didn’t answer and, when I got up close, I could see he was dead,” Dorothy continued. “I woke Lucy and she called the doctor and his nurse.”

“I told the agency to fire that damn nurse,” said Gertrude. “She had one job, to make sure Peter didn’t come to any harm, and she to blow sth.(ifml.)etw. vermasselnblew it.”

“But what for was he coming here?” said Evangelina. “That is what I am wondering.”

“Perhaps he just wanted to see the house one last time,” said Dorothy. “I understand Lucy and Klaus have left it very much as it was when he lived here.”

“Yeah, well, that’s going to change,” said Gertrude. “Soon as Klaus moves out, we’ll knock this place down. We could put four houses on this land, sell them and make a load of (ifml.)einen Haufena load of money for all of us... for Klaus, too.”

“Oh, yes,” added Evangelina enthusiastically. “My husband, you know, he told Peter much times he could make big profit with this land. But Peter say always no, no, no. The house is for the young ones to live in. Now, we see!”

“That’s what she believed,” said Gertrude. “But as the lawyers don’t have a willTestamentwill and nothing has been found at his apartment, everything will be to splitteilensplit amongst the three of us.” 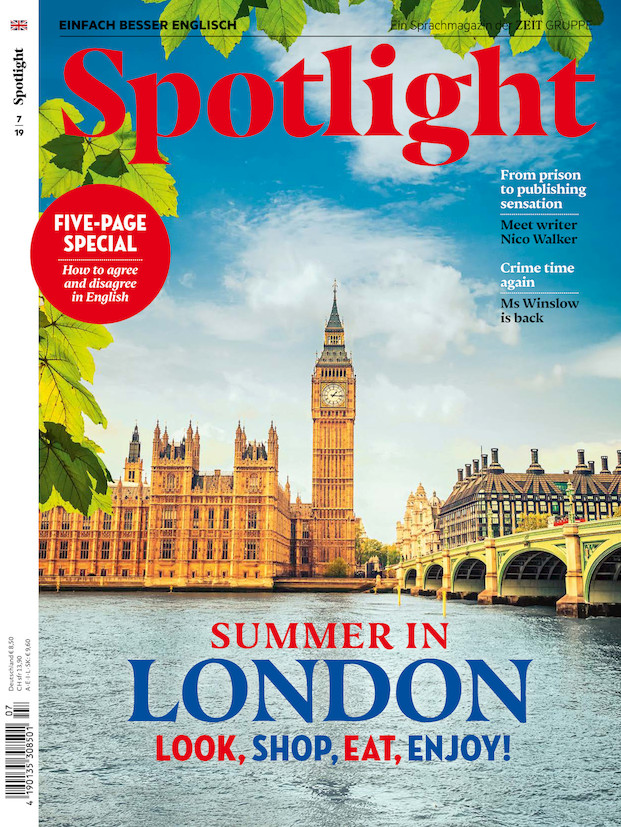