Sissinghurst Castle Garden is a place for the imagination. The first thing I see is the red-brickaus rotem Ziegelred-brick, twin-turretedbetürmtturreted tower. Completed in 1573, the tower caught the eye of the poet and writer Vita Sackville-West when she visited Sissinghurst more than 350 years later.

“I fell in love; love at first sight,” she later wrote. “It was Sleeping Beauty’s Castle; but a castle running away into sordidnessElendsordidness and squalorVernachlässigungsqualor; a garden crying out for rescue.” That was in April 1930. Soon after, Sackville-West bought the dilapidatedverfallen, heruntergekommendilapidated house, tower and gardens, and together with her husband, Harold Nicolson, a diplomat, biographer and politician, she devoted much of her life to restoring them.

For the past six years, Troy Scott-Smith, Sissinghurst’s head gardener, has played a central role in the ongoing “rescue” of the gardens from the impact of time, disease and climate. “The garden is by nature a transientflüchtig, vergänglichtransient thing,” he tells me as we climb the tower together. “It’s essentially Vita and Harold’s garden we still have today, but it has changed over the years. ... Gardens do change. They’re a process.”

From the top, we look out across the gardens, oak woodEichenwaldoak woods and farmland of Sissinghurst. Although only 100 kilometres from London, in the Weald of Kent, it feels as if we’re in another time and place. As the garden writer Catherine Smalley observes, “Sissinghurst is a dreamy place that casts a spell.”

The name “Weald” comes from the Old English word for “forest”, and much of the area is still thickly wooded. Sissinghurst was originally a Saxon pig farm, and its long human history appealed to Sackville-West, whose epic poemEpos, Heldengedichtepic poem The Land (1926) includes the refrain: “The country habit has me by the heart.”

Sackville-West combined more relaxed, intuitive planting with her husband’s formal design. The result is that nothing looks forced. “The impression given was that every plant in the garden was delighted to be there. She chose them because she loved them; and, perhaps, they knew that,” write Laurence Fleming and Alan Gore in The English Garden.

The National Trust (UK)Gesellschaft zum Schutz und Erhalt von historischem ErbeNational Trust has managed Sissinghurst since 1967, five years after Sackville-West’s death. “The fact that Vita had this love affair [with] the garden, and with Harold,” says Scott-Smith, “is one of the reasons why the garden to resonateetw. ausstrahlen, Anklang findenresonates so strongly today — because it is romantic.”

On the way down, we stop to look at Sackville-West’s writing room, which is preserved much as it was when she lived here. “It’s nice to see where Vita wrote, and where she slept and ate, and just think about how that translates into the garden,” says Scott-Smith.

In the purple shades of the woodland garden, I find Trillium sessile (toadshadeWaldlilietoadshade) from the US alongside Anemonopsis macrophylla (false anemone) from Japan and English Epimedium acuminatum (barrenwortElfenblumebarrenwort), which in early summer will produce spectacular spray of flowersBlütenmeer, -teppichsprays of flowers coloured like cherry ice cream. Now, in early spring, I enjoy the bulbZwiebelblumebulbs and colourful low planting of the orchardObstgarten-orchard and limehier: Linden-Lime Walk, including narcissi, muscari (or grape hyacinths) and crocuses, as well as aromatic displays of magnolia. The summer highlight for most people are the roses of the White Garden and cascades of scentedduftendscented Rosa mulliganii. Romantic, definitely, but the word that defines Sissinghurst for me is “unconventional”.

When Sackville-West started her garden, global conflict was approaching. Her lifestyle (and same-sex relationships) lay in contrast to the rigidstarrrigid mindsetGeisteshaltungmindset of fascism. Her gardening to defysich widersetzendefied the expectations of 1930s’ style: lawns, tennis courts, pondTeichponds and crazy pavingMosaikpflastercrazy paving. She poured out poetry, novels, letters — and a gardening column for The Observer — and still found time to devote herself to her garden, the Kent landscape and their stories. 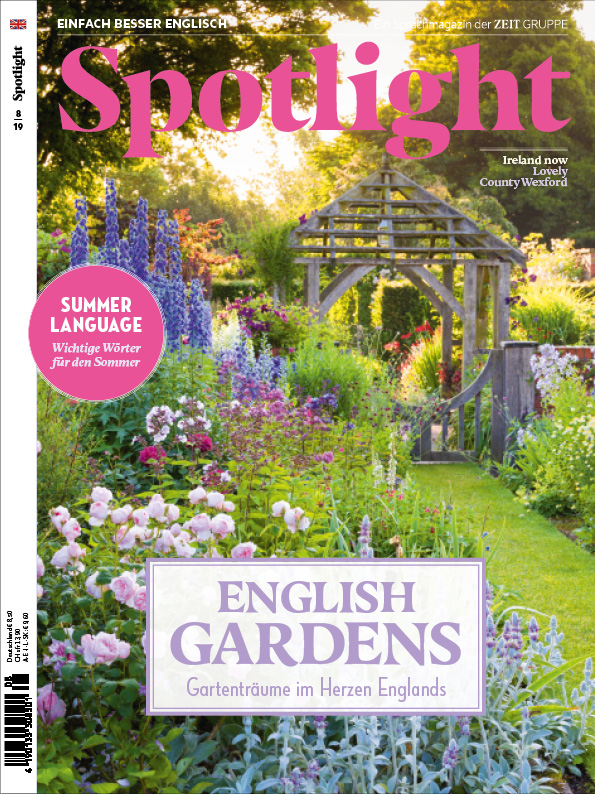