We all know at least a few fairy taleMärchenfairy tales: Hansel and Gretel, Little Red Riding HoodRotkäppchenLittle Red Riding Hood or Sleeping BeautyDornröschenSleeping Beauty. Their structure is familiar to us. They all begin: “Once upon a time...” and use repetitive language to create drama. Remember: “Grandma, what big teeth you have; Grandma, what big ears you have.”?

We have rewritten 24 famous fairy tales for the 21st century. Each one includes examples of a specific grammat­ical structure. This structure is explained in the notes at the end, where you will also find some related exercises. This month, we present a new version of Rumpelstiltskin or, as we call it, “Rumpelpumpkin”.

Once upon a time, there was a clever young woman called Gwen, who was in some difficulty...

Gwen looked around the huge room. It had probably once been a beautiful ballroom. Dusty chandelierKronleuchterchandeliers hung from a golden ceiling. In the centre of the room stood two long tables. They were covered with bottles of chemicals and bags of powder. “Right, Missy,” to croakkrächzencroaked Mr King, “I want a kilo by tomorrow morning, or your old man’to be a goner (ifml.)erledigt seins a goner. Get to work!” The door to bang shutzuschlagenbanged shut.

Mr King was a “business associateGeschäftspartner(in)business associate” of Gwen’s dad. Her father had been out of work for a few months and had recently been diagnosed with depression. He owed Mr King quite a lot of money. That morning, Mr King had visited her house to collect his money, but her dad didn’t have it. Mr King suggested that Gwen help him out for a few days to repay the debtSchuldendebt. Her father had to boastangeben, prahlenboasted about Gwen getting an ANote 1A in A-level (UK)etwa: AbiturA-level chemistry.
“Can she make MDMAEcstasyMDMA?” Mr King asked.
“Of course!” answered her father, and to Gwen he said: “If you do this little job, we’ll be out of trouble, and you can go to university.” She was desperate to take up her place there, but felt guilty about leaving her dad. He hadn’t been himself since her mum died. “I know it’s a lot to ask, Gwenny,” he to plead(mit Nachdruck) bittenpleaded, “but I so want to make a fresh start and to get back on trackwieder auf die Beine kommenget back on track.”

Shaking, Gwen sat down on the ballroom floor. She didn’t have the first idea what MDMA was made of. It wasn’t part of the national curriculum. She was about to google “how to make MDMA” on her phone, when she heard a noise and looked up to see a strange-looking little man the shape of a pumpkinKürbispumpkin with rumpledzerknittertrumpled clothes.
“What’s the matter?” he asked. When she told him, he said, “What will you give me if I make it for you?”
“My earringOhrringearrings?” offered Gwen, and the little man agreed. Gwen looked on in aweEhrfurchtawe as he set to work. After a while, she lay down on a pile of strawStrohballenpile of straw in the corner of the room and fell asleep.

By the time she woke up the next morning, the little man had disappeared. Lots of small bags of powder were neatlysauberneatly to stackstapelnstacked on the table. Mr King was very pleased. He was on to a good thing here. He had his men bring more chemicals and told Gwen that he’d be back the following morning. Gwen sat down on the floor in despairVerzweiflungdespair and began to cry. Then, as if by magic, the little man appeared. “What will you give me this time if I do the work?” he asked. Gwen offered him her phone, but he shook his head. So she held out her ring. It had been her mother’s wedding ring, and she always wore it. He took it. 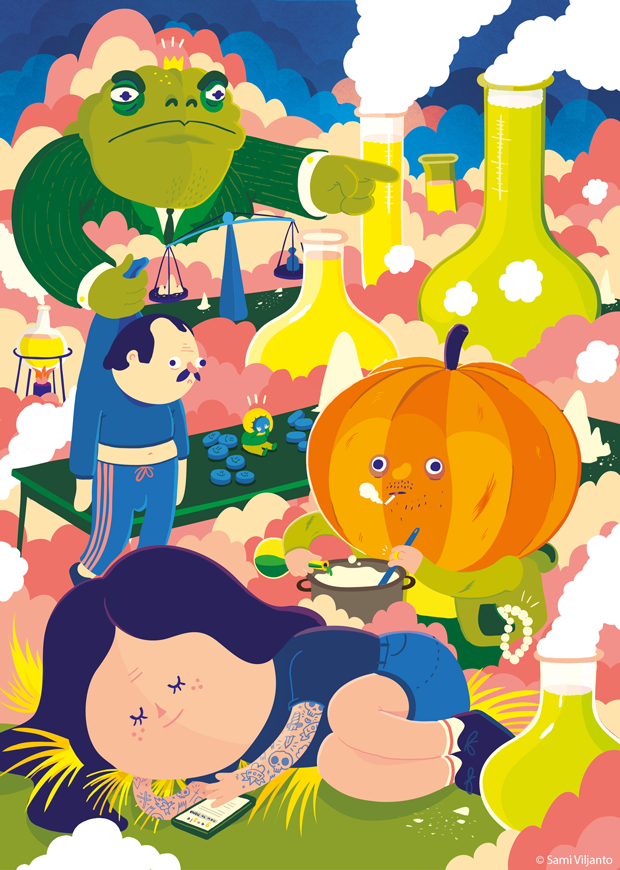 On the third night, when the little man showed up, she had nothing to give him.
“I know,” he said. “I’ll take your firstborn child if you marry Mr King.”
“What? Ugh!” replied an outragedempörtoutraged Gwen. “You can’t just go around demanding that girls have babies and then hand them over to you. And Mr King, really!”
“I’m only to mess with sb.jmdn. ärgernmessin’ with you,” the little man said and let out a high-pitchedschrillhigh-pitched giggleKicherngiggle. “That would be really strange. Tell you what, if you guess my name, we’ll forget all about it.”
“Is it Heisenberg?” guessed Gwen.
“No,” snortschnauben, prustensnorted the little man.
“Günther? Quentin? Hamish?”

“No, no and no,” answered the little man, barelykaumbarely looking up from what he was doing. As he worked through the night, Gwen continued to guess. At some point, she fell asleep, and when she woke up, the little man had disappeared. Gwen wondered if he had forgotten about their deal.

Mr King, pleased with his massive stash (ifml.)hier: Vorrat illegaler Drogenstash of synthetic drugs, said, “Thiell your dad we’re good,” and he ordered Gwen an Uber. At home, she found a note from her father: “Started new job at the mill today. Back by six. Love you, Dad”.

After she had showered and had some breakfast, Gwen reached for her phone and sent a picture she’d managed to take of the little man to all her friends. “Ever seen this guy? I need to know his name,” she wrote. One by one, her friends replied, but it wasn’t until the evening that a friend of a friend sent her a shot of a Tinder profile with the captionBildunterschriftcaption, “This him?”
“Oh, my God! That is him!” to gaspkeuchen, nach Luft ringengasped Gwen. “That’s really his name? You couldn’t have to make sth. upsich etw. ausdenkenmade it up!”

The first term at university had flown by, and in a few days, Gwen would be going home to spend Christmas with her father. Whenever she thought about those scary (ifml.)beängstigend, schrecklichscary days in the MDMA lab, she couldn’t believe that it had actually happened.

As she was on her way to a lectureVorlesunglecture, the strange-looking little man suddenly appeared in a hallway. Gwen felt sick. She hoped he had forgotten all about her.
He to flashaufblitzen lassenflashed his crookedkrumm, schiefcrooked teeth and to hisszischenhissed, “How’s your dad, Gwenny?”

“Much better, thanks,” replied Gwen. Then she to blurt sth. outmit etw. herausplatzenblurted out: “I know your name. It’s Rumpelpumpkin!” The little man jumped up and down in rageWut, Zornrage.
“Who told you?” he demanded. But before Gwen could answer, Rumpelpumpkin stampstampfenstamped his foot on the floor so hard that it went straight through. He disappeared and was never to be seen again. Gwen and her father lived happily ever after.

What did they say?

When Rumpelpumpkin to bargain(ver-)handelnbargains with Gwen, he says: “If you guess my name, we’ll forget all about it.”

This is an example of the first conditional. First-conditional sentences are formed like this:
Question: What will you give me if I make it for you?
Answer: If you do the work, I’ll give you my earrings.

An if-clause often refers to a condition — something that must happen in order that something else can happen. An if-clause can come at the beginning or the end of the sentence. If the if-clause comes at the end, you don’t need a comma. Remember not to put will in the ­if-clause:

Instead of will, you can also use another modal verb + infinitive: