I am the River Thames. Come with me, on my journey through the mightymächtigmighty heart of London.

Let’s meet in Richmond upon Thames in south-west London, on a perfect summer’s evening. Along the riverside, pub terraces are full. Couples have rented boats: a canoe emergeauftauchenemerges from under a stone arch of the bridge, passing gondolas tied up on the bankUferbanks. Someone sits to sketchzeichnensketching under a weeping willowTrauerweideweeping willow. Bikes are chained to a fence, the wheels wet. People forget that my high tideFluthigh tides reach a long way inland.

It’s often said that Richmond’s noble manorHerrenhaus, Villamanors and parks are the best place to make my acquaintanceBekanntschaftacquaintance, but there are many other places, too. People also say that rivers can’t speak — but, hey, what do they know? Take the time to sit down and listen to us, and you’ll find that many of my smaller cousins are very talkativegesprächigtalkative. The weather and the season can make a difference, but mostly it depends on who’s listening.+

I don’t like too much chat — though I do slurp, fart and gurgle

So, if you have time to listen, come with me. Don’t worry, I don’t like too much chat — though I do slurpschlürfenslurp, fartfurzenfart and gurglehier: plätschengurgle. That’s just part of getting old. after allimmerhinAfter all, my life began 140 to 170 million years ago, during JurassicJuraJurassic times, when dinosaurs ruled the land and sky. I’ve been called “liquid history”.

Brexit has recently to cause a stirfür Aufregung sorgencaused a stir, but actually it’s nothing new. When continental Europe rose up from the sea millions of years ago, the part that became Great Britain was firmly attached. Then, about 8,600 years ago, an underwater landslideErdrutschlandslide in Scandinavia seems to have caused a chain reaction and “Doggerland” (the plateau over which I had flowed) was to submergeüberschwemmensubmerged. The future Great Britain became an island, and the geological Brexit was complete. 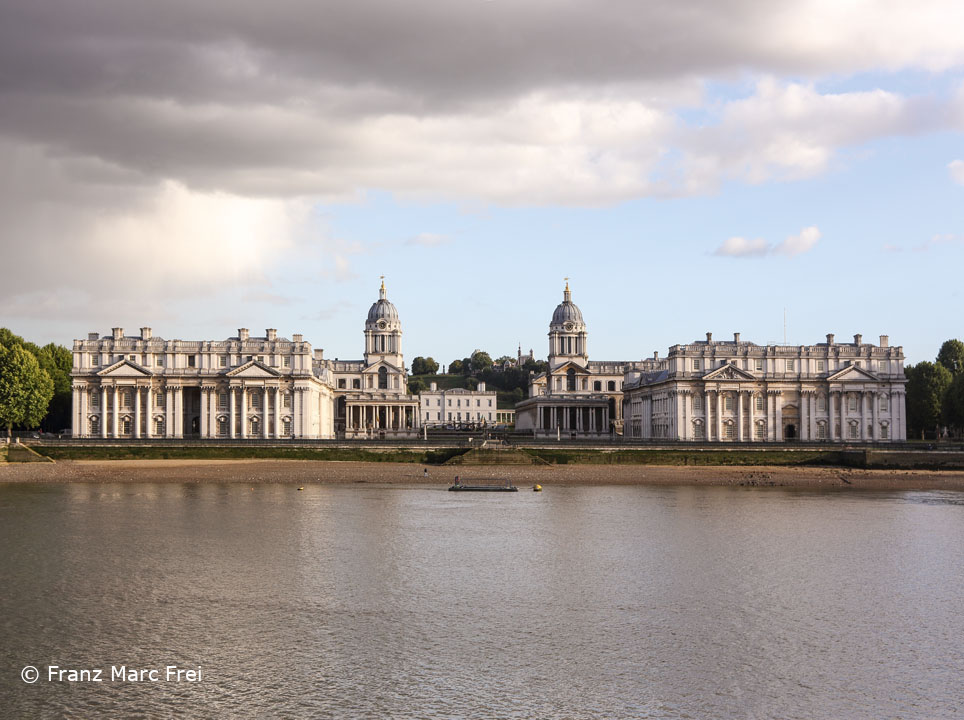 A voyage through time

London wouldn’t exist without me. Indeed, if I hadn’t been here, southern England would have developed very differently — maybe even the whole world.

Does that sound arrogant? Think about it — think about time itself! The Royal Observatory sits on a hill in Greenwich on the grounds of the Old Royal Naval College. Designed by the architect and astronomer Christopher Wren, it’s a small building dating to 1675. Greenwich Mean Time (GMT)Westeuro­päische ZeitGreenwich Mean Time (GMT) was measured here, until it was replaced in 1928 by the more accuratepräziseaccurate Universal TimeWeltzeitUniversal Time. By adding or subtracting hours from GMT, time zones were established that reached into the furthest corners of the world.

In 1884, at an international conference, it was decided to locate the zero meridian here at Greenwich, and to make it official for the whole world. British marine mapSeekartemarine maps were already being used on ships everywhere, so it seemed the logical thing to do. Since then, Greenwich has divided the earth into eastern and western hemispheres.

This part of London, so closely connected to the sea, is dominated by maritimeSeefahrt-, Seefahrer-maritime history and commerce. The terraces of pubs like the Prospect of Whitby or the Mayflower Inn are open doorways to travel back through time.

Back in those days, I was the city’s sewer

Nearly 2,000 years ago, Roman ships sailed into my estuaryFlussmündungestuary, navigated a few twists and turnsWindungen und Kurventwists and turns, and arrived at a naturally protected harbour they called Londinium. You can see some of the old harbour walls in the Museum of London.

Much later, just over 400 years ago, you might have seen the first East India Company ships set sail from here on their voyage to India, to capitalize on sth.von etw. profitierencapitalizing on new trading opportunities on the subcontinent. (Today, we’d probably call it globalization.) Laden with textiles and other cargoFracht, Gütercargo, these ships would return in a few months or even years, unloading their goods at the huge docks.

Between 1700 and 1800, London’s population doubled to a million inhabitantEinwohner(in)inhabitants, doubling again in the half-century that followed. By 1901, 6.5 million people called themselves Londoners. And me? Back in those days, I was the city’s sewerAbwasserkanalsewer. Londoners apparently forgot that I was their home and had given them life.

London Bridge is falling down

In 1855, the Metropolitan Board of Works set to work on my bridges. Londoners were probably pleased. At that time, London Bridge was the only one in the city, dating back to Roman times. In the 19th century, there were houses on it, and it used to get horribly congestedüberfülltcongested. Its archBogenarches were so narrow that even bargeLastkahnbarges had difficulty getting through. London Bridge has been torn down and rebuilt several times in its 2,000-year history; the one you see today dates back to 1973.

Next, in 1894, Tower Bridge was built, still the most easterly of the city’s bridges. The architects designed a drawbridge that could be raised when large ships needed to pass. It has become an iconWahrzeichenicon of London.

The road crossing Tower Bridge leads directly past the 11th-century Tower of London, a former fortressFestungfortress and dungeonKerkerdungeon that’s steeped in historyvon Geschichte durchdrungensteeped in history. Today, it’s one of London’s main tourist attractions, housing the Crown Jewels. But over the centuries, the Tower was the setting of some of London’s greatest tragedies. You can read about them in Shakespeare’s King Richard III and Hilary Mantel’s Wolf Hall, for example. 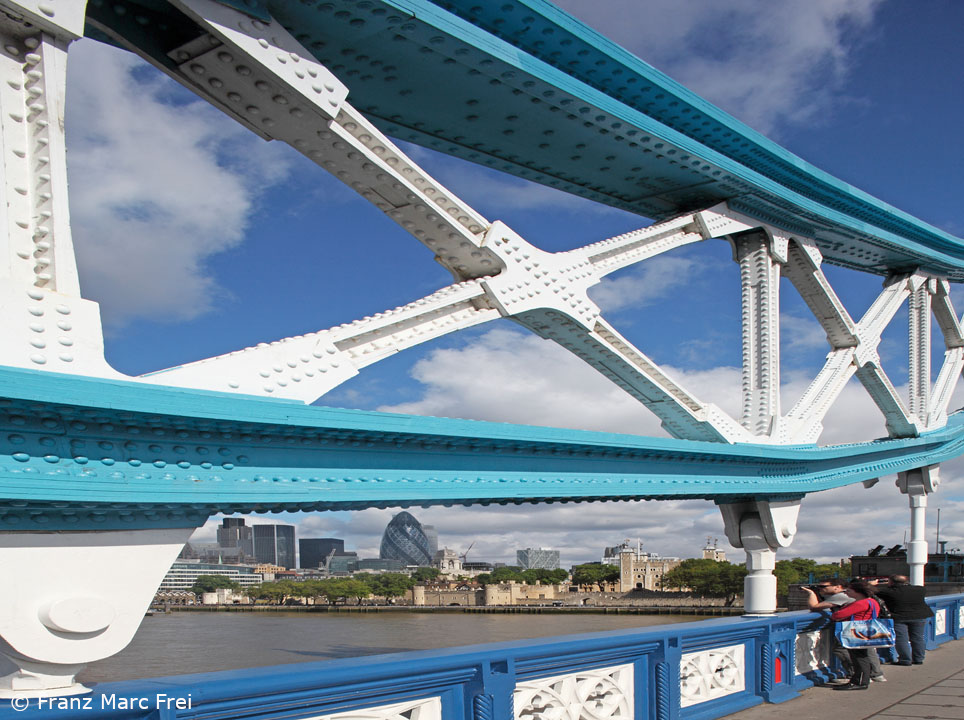 The view from Tower Bridge towards the City of London, showing The Gherkin and the Tower of London 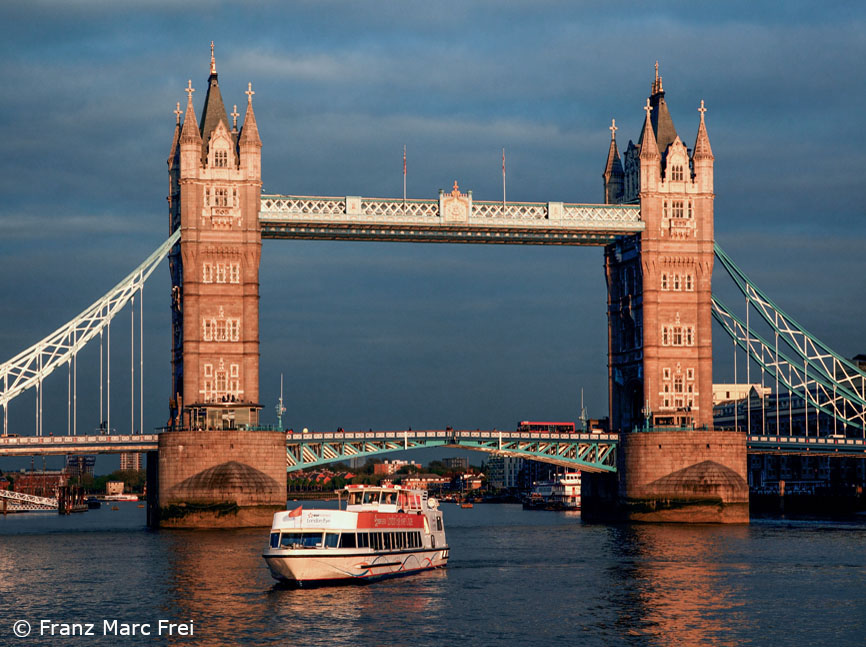 Tower Bridge is made of over 31 million bricks

With imperial ambitions, along came wealth. I became to gentrifyaufwertengentrified. Over the centuries, I’ve been painted by many artists. Mostly in the foreground, with the city’s silhouette and the Palace of Westminster — today’s Houses of Parliament — behind me.

The most famous of those painters were the Venetian Canaletto and the English artist J. M. W. Turner. The largest collection of Turner’s works can be found at Tate Britain. The museum stands on my banks — just like its sister, Tate Modern, which is situated at the south end of the Millennium Bridge.

One day that I’ll never forget was 17 July 1717. After being occupied by generations of Stuart monarchs, the throne of Great Britain passed to George I — a German from the House of Hanover.

This was something new. Would society accept him? To to sweeten the pilletw. versüßensweeten the pill, a celebration was planned. A celebration to to showcase sth.etw. zur Schau stellenshowcase power — a kaleidoscope of brilliance and glory in which all Londoners would feel themselves included.

An entire orchestra filled the boats that set off from the wharf (pl. wharves)Landungsbrückewharves, playing under the to twirlwirbelntwirling batonTaktstockbaton of the German-born composerKomponist(in)composer George Frideric Handel. His Water Music is one of the most famous pieces of baroque music ever composed.

The event inspired successors: indeed, I’ve often been the backdropKulissebackdrop for great ceremonies. In 1806, more than two months after the victorioussiegreichvictorious Battle of Trafalgar, Admiral Nelson’s corpseLeichnamcorpse — preserved in a barrelFassbarrel of brandy, so the story goes — was taken to Greenwich.

From there, it travelled in a ceremonious procession upriverflussaufwärtsupriver to Whitehall and was buried in St Paul’s Cathedral. And until 1855, the Lord Mayor’s Show was a magnificent river event. The last celebration (for the time beingvorläufigfor the time being) to be staged on my waters was Queen Elizabeth II’s rainy Diamond Jubilee pageantFestumzugPageant in 2012. 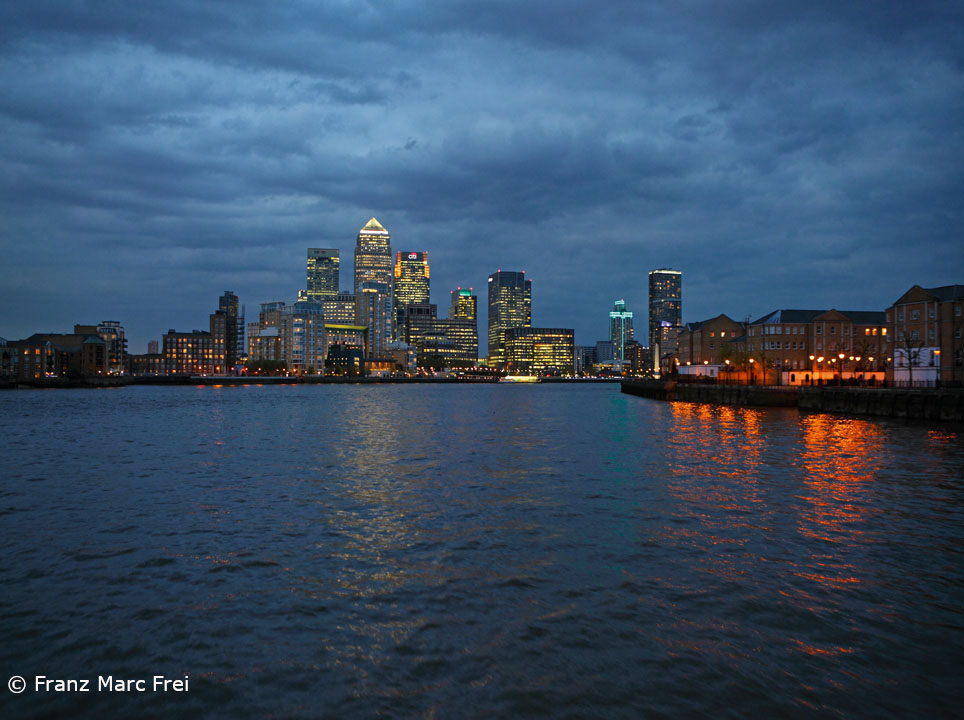 The Isle of Dogs, dominated by the gleaming towers of the Canary Wharf business district

There are so many places in London where you can relax on my banks, but if you want to understand England, it’s best to follow me to my source.The Thames Path is one way to do this; boat trips are another.

The first pleasure cruiseVergnügungsfahrtpleasure cruise to have been documented took place in October 1555. The all-inclusive price covered the boat trip and refreshments, as well as tickets to see two Protestant bishops being burned at the to burn sb. at the stakejmdn. auf dem Scheiterhaufen verbrennenstake in Oxford.

To the west of London, I soon get smaller. I’m slower than most rivers; even Munich’s River Isar carries more water than I do. Tourists complain about me because I meander and make it hard for them to to get one’s bearingssich orientierenget their bearings. To make to make matters worsezu allem Übelmatters worse, the tides change the direction in which I flow.

How long am I? Well, my official source is in a lonely field, near the small village of Kemble, in the Cotswolds. But because water bubbles up from it only in winter, there’s talk of naming the River Churn as my source.

If that happens, I’ll measure an impressive 229 miles (368.5 km) in total length and will be able to knock the River Severn off its throne as the longest river in Great Britain.

It doesn’t really matter what they decide: I’ll always be in a to be in a class of one’s owneine Klasse für sich seinclass of my own. It simply takes me a while to get going — and my uniqueeinzigartig, besondersunique charm more than to make up for sth.etw. wettmachenmakes up for any unflatteringwenig schmeichelhaftunflattering statistics.

In addition to at least 12 varieties of fish, many other river creatures have found their way on to the plates of Londoners over the centuries. jellied eelAal in GeleeJellied eel, for example, remains a much-loved delicacy.

And, of course, water — a basic necessity of life. The Thames still provides 70 per cent of London’s freshwater: about 0.57 million gallons (2.16 million litres) a day. The private utility companyVersorgungsbetriebutility company Thames Water is responsible for its delivery, as well as for the disposalEntsorgungdisposal of the 0.97 billionMilliarde(n)billion gallons (3.67 billion litres) of waste waterAbwasserwaste water generated by its 10 million clients — every day. 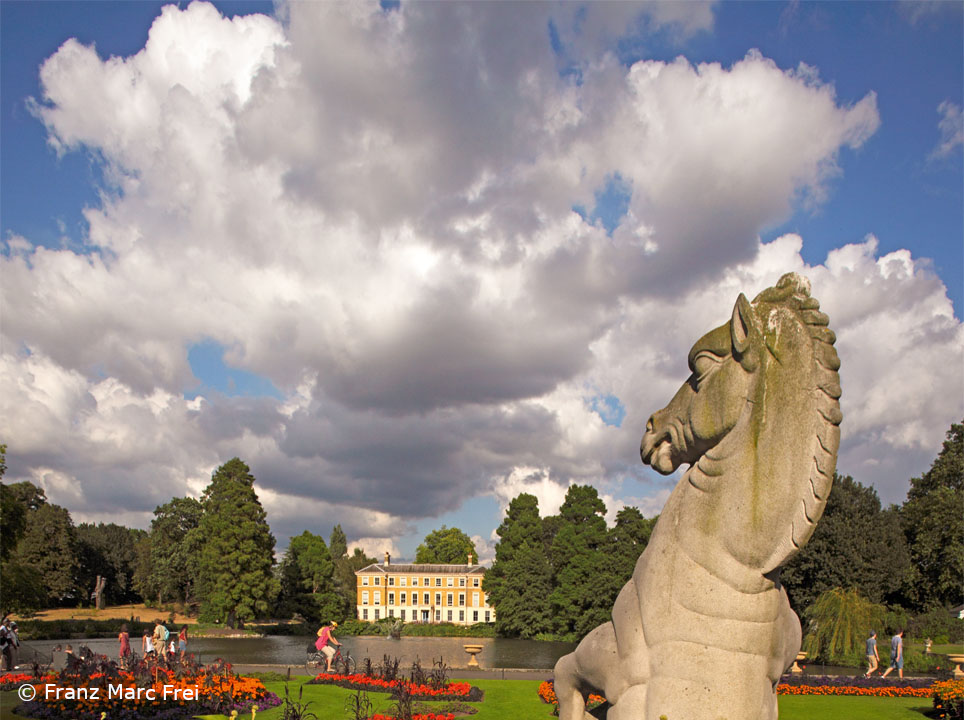 Dating back to 1840, Kew Gardens are a UNESCO World Heritage Site

A few miles further on, Strawberry Hill is where the writer and politician Horace Walpole built himself a “little Gothic castle” in the 18th century. This was one of England’s first landscape gardenLandschaftsgartenlandscape gardens, integrating a beautiful house within an apparently natural setting to make one attractive view.

Hampton Court, built in the Tudor style, was Henry VIII’s favourite palace and is only a few river curves further to the west. It’s easy to imagine the ladies to strollschlendern, flanierenstrolling in the park here, trying to catch the king’s eye. 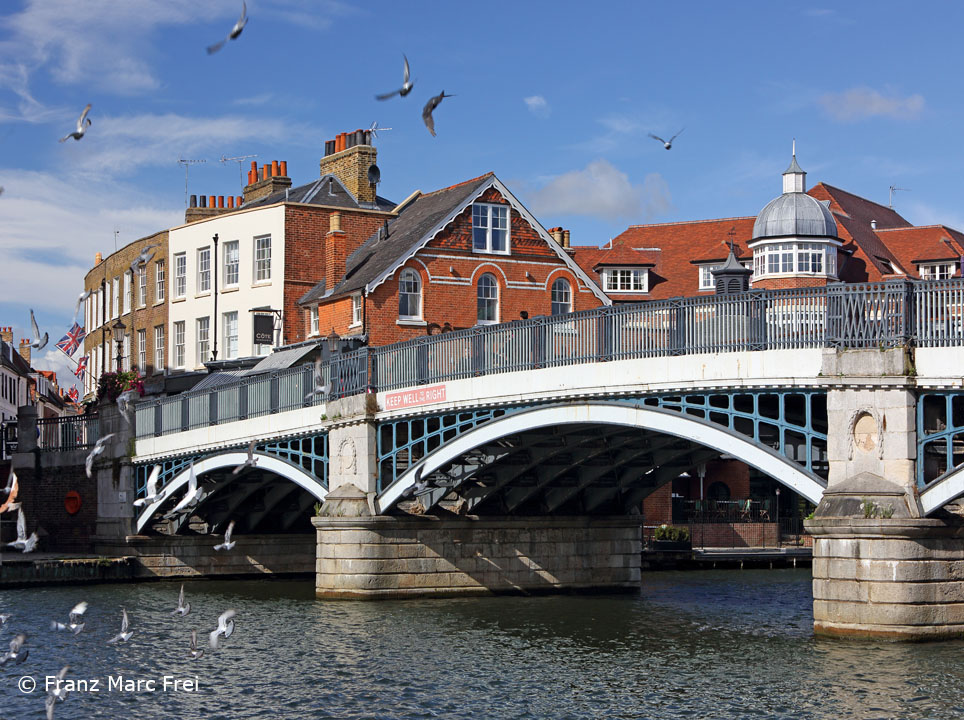 The historic market town of Windsor also to graceschmücken, zierengraces my banks. On the edge of a royal hunting forest, it was chosen in the 11th century by William the Conqueror (King William I) to be the site of a castle. Today, Windsor Castle is the largest occupied castle in the world. The Queen spends most of her private weekends here. She’s officially in to be in residencewohnenresidence at Windsor for a month over Easter, and for one week each June. Parts of the castle are open to visitors all year round.

On the other side of the river, Eton College is home to a famous boys’ boarding schoolInternatboarding school. Former students include not only the royal princes William and Harry, but also 007 author Ian Fleming, actor Hugh Laurie and former Prime Minister David Cameron.

And then there’s Oxford, the “City of Dreaming SpiresStadt der verträumten TurmspitzenCity of Dreaming Spires”. More than 24,000 students study here at 39 different colleges. Important careers await them in business, research, politics and academiaakademische Weltacademia — maybe even with the Port of London Authority (PLA), where all decisions concerning me are taken.

In 2016, the ambitious Thames Vision strategy was to launchins Leben rufen, startenlaunched, going further than many previousvorherig, früherprevious plans to maximize my use. By 2035, I hope to be carrying enough merchandiseWaren, Gütermerchandise to take 400,000 lorries off London’s busy roads. At last, it looks as though my protection is being taken seriously.

So… do you still think that I, the Thames, can’t speak?