In the January issue of Spotlight, English detective Dorothy Winslow is back with a new case to solve: “The barrow king”. Here, we have an exclusive interview with Ms Winslow’s creator, James Schofield.

In 2016, we asked you to create an English amateur detective who solves crimes in Germany. As a talented short-story author, we were sure you would come up with a wonderful protagonist. How did you feel about the idea?

First of all, very flatteredgeschmeicheltflattered, but then quite alarmedhier: beunruhigtalarmed. My short stories have usually been shorter than what you wanted. You also had specific wishes: English detective, in Germany and visiting three different places. I did a lot of head scratching.

Can you tell us how you came up with the character of Ms Winslow?

Ms Winslow obviously to oweverdankenowes a lot to Agatha Christie’s heroineHeldinheroine, Miss Marple. But she also represents a reaction of mine against the Kurt Wallander type of investigator in the Scandinavian school of detective story. I wanted a central protagonist we could all identify with.

Ms Winslow owes a lot to Agatha Christie’s Miss Marple, but also represents a reaction of mine against the Kurt Wallander type of investigator

Where is Heroldstein, the village where a lot of the action takes place?

Heroldstein is near Speyer in the Rhineland-PalatinateRheinland-PfalzRhineland-Palatinate. I have an actual village in mind, and in the stories, I try to to captureeinfangencapture a little bit of the feeling I get from the place and the people when I go there.

Oh, I think I’ll leave that to everybody else to decide. I wouldn’t want to to imposehier: aufzwingenimpose my vision of Dorothy on her readers.

How do you come up with the plotHandlungplots?

I want them to be plots that don’t necessitateerfordernnecessitate the involvement of the police, which cuts out the more violent possibilities. Somebody in the real village once told me that bad things can happen there, but most people would to think twicees sich gründlich überlegenthink twice before calling the police, because the balance in the village is important if it is to function as a community. So in my stories, illegal things do happen, and the perpetratorTäter(in)perpetrators are punished for what they do, but in a way that allows them to continue to live in the community without losing face.

Those are the parameterRahmenbedingungparameters. Then I have to do a lot of walking my dogs and staring vacantlyleer, geistesabwesendvacantly at trees and out of windows until ideas filter through from things I’ve seen or read or heard. Little by little, it flows together, and graduallyallmählich, schrittweisegradually I build the story — sentence by sentence.

Do you have a favourite story so far?

Ms Winslow and her friend Armin von Weiden get along prettyziemlichpretty well together. Is this the beginning of a romance?

What do you think?

Can we expect more Ms Winslow stories in the future?

Dorothy is always up to something. In fact, she has just come back from Vienna, and she asked if I would like to to pop roundvorbeischauenpop round for supper. I’m almost certain she has something to tell me...

You can read the fourth Ms 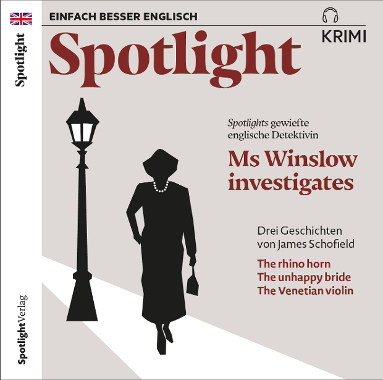 Winslow story in the January issue of Spotlight magazine. And if you missed the first three stories published in 2017, these are now available on a special CD or as a download.

Find out more about the CD and download here.