Calum Franklin calls himself a “pastryGebäckpastry deviantvon der Norm Abweichende(r)deviant”. Talk to the London chef for a few minutes and it becomes clear that his type of iconoclasm is not so much about breaking the rules as perfecting them to the point of obsessionBesessenheitobsession.

This he has done with pie: pork pie, codKabeljaucod pie, beef Wellington pie... Should you ever be lucky enough to visit The Pie Room, Franklin’s eccentric Victorian kitchen nestlingeingebettetnestling within the Holborn Dining Room, you will enjoy the very best in pies.

His recipe for success is a no-nonsense combination of hard work and focus. This city boy started out the traditional way, cleaning pots and pans. He was 17, fresh out of school and immediately knew this was the life for him.

There was something about it, he says. “I remember going home and telling my brothers: ‘This is what I want to do.’” And Franklin never looked back.

He rediscovered the art of pie making after finding some antique pie mouldFormmoulds in a basement store in the building that houses the Holborn Dining Room, where he works as head chefChefkochhead chef.

“I realized I didn’t know how to use them, that there was a big gap in our knowledge of traditional techniques,” he says. “Then I thought: ‘First, I’m going to teach myself, then I’ll train the team.’”

Meet the pieman: Our headline refers to the popular English nursery rhymeKinderversnursery rhyme “Simple Simon”, which begins with the line: “Simple Simon met a pieman”. The first two verses are about a not-very-clever boy and his meeting with a travelling pieman. The rhyme dates back to at least 1764.

From then on, it was pie all the way. He learned tricks, such as storing the chopping boardKüchenbrettchopping board in the freezer — to keep the doughTeigdough firm while rolling it. Making pastry requires discipline, he says. “It’s not as if you can add salt or lemon later.”

Before very long, the pies had outgrown the kitchen. Franklin and his team began work on the ultimate pie in the skyLuftschloss, Ding der Unmöglichkeit (Wortspiel mit „pie“)pie-in-the-sky project: a special Victorian kitchen with copperKupfercopper and brassMessingbrass utensils, selling hundreds of pies every day through a hole in the wall — a window on to British culinary history.

Franklin has given new life to a style of cooking that, it seems, was slowly dying out, for London’s pie and mash shops (see page 29) are not as popular as they once were. “Pie has been part of our food culture for 600 or 700 years,” he says. “It’s gone in and out of fashion, moving between royal banquetBankettbanquets and the tables of the simplest peasantBauerpeasants. I wanted to make it reveredverehrtrevered again.” 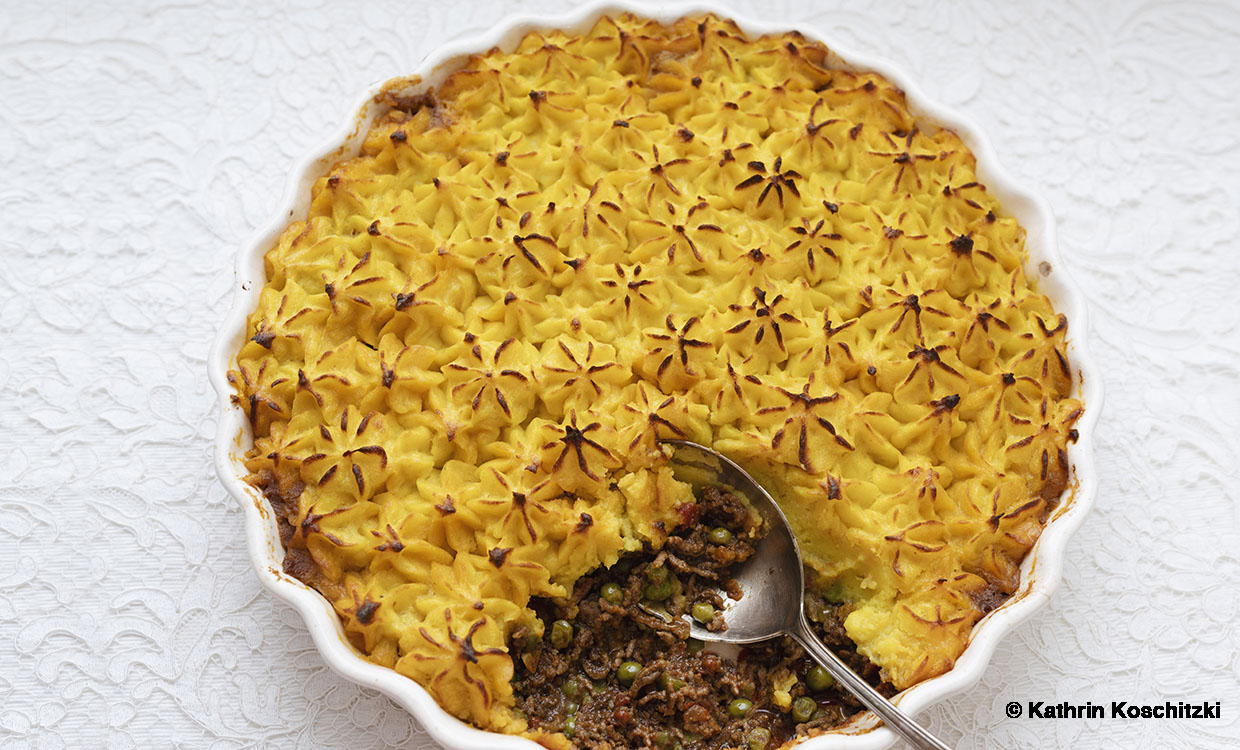 Heat the oil in a large frying pan over medium heat. Add the onion and sautékurz anbratensauté for ten minutes, until it starts to brown. Add the turmeric, garam masala and cumin seeds — toast for two minutes. Add the garlic, ginger and chilli — sauté for a further five minutes, until soft and lightly browned. Add the beef mince and sauté until the liquid has to evaporateverdunstenevaporated. Then add the tomatoes and cook for another 15 minutes. Add the peas and coriander leaves. Taste and adjust the seasoning if necessary, then spoon into the ovenproof pie dish and allow to cool.

For the potato topping, boil the potatoes in a pan of salted water for 15–20 minutes (or until soft in the centre), then to drainabgießendrain. Add the milk, butter and turmeric, then mash together well. Finally, fold in the egg yolk and mix well to combine.

Spread the potato topping over the minced beef mixture in the pie dish. Put the dish into the preheated oven and bake for 30 minutes, or until the beef mixture bubbles up the sides of the dish and the topping has a crispyknusprigcrispy golden crustKrustecrust.