In 2012, the word “dench” was suggested for inclusion in the Collins English Dictionary. According to the Collins website, it means “a personal or group opinion that an object is good or of excellence”

“Dench” was made popular by English rap artist Lethal Bizzle, who also has a clothing line with the logo “Stay Dench”. Although the word has nothing to do with the actor Judi Dench, in 2017, she was happy to take part in a rap video with Lethal Bizzle. The video clip shows her wearing a “Stay Dench” cap and coolly rapping — and laughing when she got the lyricsSongtextlyrics wrong — on Bizzle’s song “Celebrate”. The clip tells you a lot about Judi Dench: professional down to the very last detail, and with a great sense of humour.

Her first ambition was to be a ballet dancer, and later, a theatre designer

Born in 1934 to a doctor and amateur actor, Reginald, and Eleanora, a housewife and an amateur maker of theatre costumes, Dench grew up in and around the world of amateur dramaticsTheater, Darstellungskunstdramatics in York. Her older brothers acted at school and Dench herself remembers her first role — as a snailSchneckesnail in a school play. Her father had made her a very large shellhier: Gehäuseshell, and when her parents came to watch their daughter perform, she stood up to see them and was told loudly by the headmistressSchulleiterinheadmistress to “get down, Judith”. Later, she wasn’t happy about being given the role of a fairyFeefairy in a school nativity playWeihnachtskrippenspielnativity play while her friends were playing angels and kings. Little Judi thought that fairies had nothing to do with the nativity. She wanted to play the virginJungfrauVirgin Mary.

Dame Judi remembers doing a lot of to dress upsich verkleiden, sich herausputzendressing up as a child — costumes were often taken from a huge basket in the family home. Her first ambition was to be a ballet dancer, and later, a theatre designer. Her older brother Jeff, who was studying dramaSchauspieldrama at the Central School of Speech and Drama in London, is the one who inspired her to attend acting school. He would come home from Central with lots of fun stories. It sounded like something she wanted to do.

So, fun was always part of her story, but from the very beginning, Dench was completely to be dedicated to sth.nur für etw. leben, sich etw. verschrieben habendedicated to her profession. She says that during her own three years at Central, she watched “every play in London”, observing and memorizing not only her own parts, but those of others as well. When she was asked to to reprisewiederholenreprise the role of the fairy queen Titania in a 2010 production of A Midsummer Night’s Dream, she was still word-perfect — 48 years after she first played that role in 1962! She was also exhaustederschöpftexhausted at the end of each performance. As Dench writes in her auto-biography, And Furthermore: “...not only was I saying my part, but I found myself saying everybody else’s parts too”. 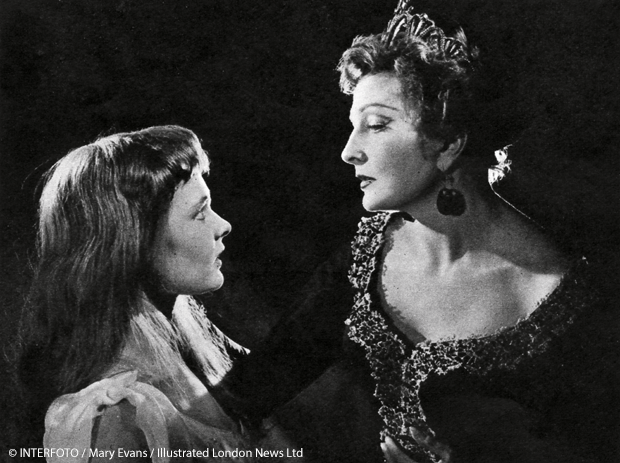 Early days: Judi Dench as Ophelia and Coral Browne as Gertrude in Hamlet in 1957

Success did not come immediately. When Dench left Central in 1957, she was taken on by Britain’s iconic Old Vic theatre in London to play Ophelia in Hamlet. Critics were furiousaufgebrachtfurious to see an “unknown” in such a famous role. Her reviews weren’t good and she was replaced when the company took the production to New York. Dench spent six months watching her replacement and was then allowed to return when the production went to Yugoslavia.

Her dream, she once said, is to “play a woman from Afghanistan who turns into a dragon in the second act”. It may be hard to find that role, but she’s played just about everything else. From queens on stage (Shakespeare’s Titania, Hermione, Katherine) to queens on screen (Queen Victoria in Mrs Brown and Queen Elizabeth in Shakespeare in Love), from mad woman (Lady Macbeth) to bad woman (an evil schoolteacher in Notes on a Scandal); from the powerful (M in seven James Bond films) to the sad (Iris, Philomena) and the frankly joyful (so many more feistylebhaft, temperament­vollfeisty Shakespearean heroineHeldinheroines).

Dench is known for being discreetverschwiegendiscreet, not only about her own life, but also other people’s. “I want to keep a quiet portion inside that is my own business,” she writes. In her autobiography, the illness and death of her husband, actor Michael Williams, in the year 2000 is given one very short chapter — much of which is devoted to the kindness of friends and colleagues who encouraged her to get back to work after his death. Dench is currently in a relationship with conservationistUmweltschützer(in), Naturschützer(in)conservationist David Mills. She has been frank about keeping things lively in the bedroom, and recently told a women’s magazine that she likes to visit a “lovely naughtyfrech, unanständignaughty knickersDamenschlüpferknickers shop” in London’s Covent Garden.

Dench has often been asked which of the two Bonds (Pierce Brosnan or Daniel Craig) she preferred and always tries to stay fair to both. She does, however, have a soft spot for actor Johnny Depp, and has written of her delight when she was able to dance with him during shootingDreharbeitenshooting of the 2000 film Chocolat. Sadly, the scene was cut, and Dame Judi was, as she wrote, “very miffed ifml.angefressenmiffed”. On the plus side, she was given a 12-second cameoKurzauftrittcameo role in Pirates of the Caribbean: On Stranger Tides (2011), in which Depp swings into her carriageKutschecarriage, falls on her lapSchoßlap, to nibbleknabbernnibbles her ear and steals an earring.

We like to think of Dench as a film actress because these are the moments most of us have shared with her, along with her performances in two hit TV sitcoms: A Fine Romance and As Time Goes By. But her first love was the theatre — because she suffers from macular degenerationMakuladegenerationmacular degeneration, she can no longer to navigatehier: sich zurechtfindennavigate on a theatre stage. Film is fixed for ever, but Dench has always loved the idea of being able to find something new in a role every time she steps onto the boards. And she loves the congenialityGemütlichkeit, Charmecongeniality of theatre: “I like the company of other people,” she writes, “but I love the company of actors, and to be in a company.”

When she was a guest on the BBC radio show Desert Island Discs in 2015, true to character, Dench asked for an unusual luxury item: “cut-outs of all my friends and my family … I would put them up and rearrange them all around the island.” She also asked for an audiobook read by her daughter, actress Finty Williams.

By the way, on Desert Island Discs, she chose Frank Sinatra’s version of “I’ve Got You Under My Skin” as her very favourite song. Coming from someone who’s got herself under all our skins, that says it all.