Haat ka maza is an Urdu phrase that means something like “magic hands”. It describes someone who has an almost magical gift for making food that can create a profound emotional connection. The hands of London-based chef Asma Khan are said to have this talent, and her cooking has been known to make people cry for joy.

Cooks who create this kind of devotionHingabedevotion often share the same kind of story. This usually includes a childhood spent in the kitchen, learning to cook from mothers and grandmothers. But Khan is an exception. She says she “couldn’t boil an egg” until she was in her early twenties, yet she’s the first British-Indian cook to appear on the Emmy Award-winning Netflix series Chef’s Table. And her wildly successful London restaurant, Darjeeling Express, has recentlupbringingErziehungy moved to new premisesGeschäftsräumepremises that are three times the size of the original.

Born in Kolkata in 1969 to a family with royal ancestryAbstammungancestry — Rajput on her father’s side, Bengali on her mother’s — Khan had a privileged upbringing. She admits that she was treated like a “little princess”, even though she was a committed tomboyWildfangtomboy. Her parents’ second daughter, she was sensitive to the cultural disappointment her gender brought with it: in her society, female children are not celebrated in the way that boys are, with fireworks and great joy. “We have an archaic system of dowryMitgift, Aussteuerdowry,” she said on Chef’s Table. “Girls are a burdenBelastung, Bürdeburden. A first-born girl is sad. A second girl is a disaster. It can wipe the family out financially.”

Her parents were nevertheless loving and supportive, but Khan thinks that her preference for cricket and running wild may have been her way of giving them their desired son — at least until the welcome arrival of her baby brother.

Although Khan grew up around food — her mother ran a food business — she didn’t learn to cook during her childhood. Her “wild child” personality meant that, as a teenager, she was not the quiet, middle-class Indian girl that young men were looking for. Even so, Khan found a match in Mushtaq, an academic who promised her parents he would cook for her. He forgot to add that he could make only one dish: rice.

A gift born of loneliness

In 1991, the couple moved to the UK, settling in Cambridge. Adjusting to life in a new country was difficult, and Khan was homesick. She had her first experience of a northern European winter and was often on her own at home. She desperately missed good food and sharing meals with friends and family. One day, while passing a house where someone was cooking Indian food, she realized that she could smell “home” to waftdurch die Luft schwebenwafting from the kitchen. She knew then that she needed to learn how to cook, and asked an aunt who also lived in Cambridge to give her lessons.

For two years, Khan spent the summer back in Kolkata, persuading her mother and aunts to teach her all their culinary secrets. She now describes herself as the “custodianHüter(in)custodian” of her family’s recipe archive, part of which appears in her 2018 cookery book: Asma’s Indian Kitchen. In 1996, the Khans moved to London, where Asma studied law and gained a PhD in British constitutional law from King’s College London. But instead of to pursueverfolgenpursuing a career in law, she found herself drawn to food and used her cooking skills to connect to new friends, many of them South Asian women who shared her experience of homesickness and loneliness. The women would gather at Khan’s house on Sundays, drinking her blend of masala chai, eating delicious home-made samosas and watching Indian TV on cable.

samosa: a small, triangulardreieckigtriangular fried snack sold on streets all over India.

The day the world changed

In 2012, she heard about the underground dining scene, where cooks offer a set menu at a set price to the general public. Khan liked the idea and began to hostveranstaltenhosting dinners at her home to to raise moneyGeld sammelnraise money for charity — without telling her husband. Scheduling dinners for evenings when Mushtaq was away on business trips, her friends prepared everything and she cooked, while her two sons to retreatsich zurückziehenretreated to their bedrooms. Starting off with 12 guests, the event proved so popular that she squeezed in more and more people. Khan cooked the food she knew, from Kolkata street food to the aristocratic dishes that to recallin Erinnerung rufenrecall her royal ancestry. Eventually, her sons complained to their father about the suppers. She realized that they were uncomfortable having so many strangers in their home, and so the project ended. 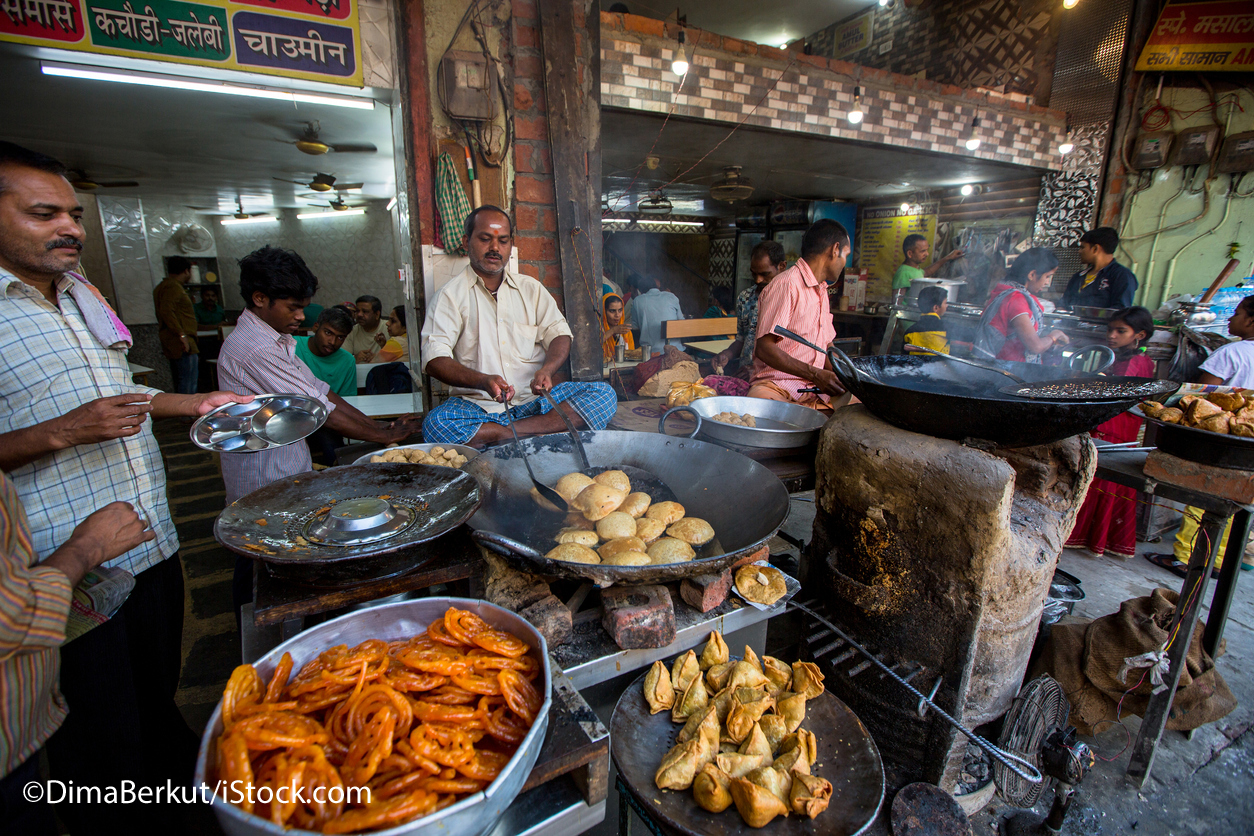 However, another opportunity soon arose when Khan and her team, all South Asian women with no previous restaurant experience, were invited to start a pop-up cafe at a pub in central London. Launching this new ventureProjektventure, which they called Darjeeling Express, proved to be a steep learning curve. Despite having professional equipment, they still prepared everything fresh by hand. Although the service was erraticwechselhafterratic, the food was delicious. When the prominent food critic Fay Maschler wrote an enthusiastic review, Khan’s business was catapulted on to another level. “That day, the world changed for me,” she recalls. “I knew I was going to make it.”

And change it did. The pop-up became an eight-month residency. Then, in 2017, she was offered a leaseMietvertraglease on a restaurant, which she to securesichern, erwerbensecured by feeding her prospectivezukünftigprospective landlordVermieterlandlord with samosas instead of presenting a business plan.

The enduring power of food

Nearly four years later, Khan and her business are thriving. She has won awards for Darjeeling Express, become a role model for the Asian community and is a vocal advocateklare(r) Verfechter(in)vocal advocate of gender equality in the hospitality sectorGastgewerbehospitality sector. She and her all-female team receive the same wage. Why? “I think when you’re all equal, there’s a huge sense of teamwork,” she says. “There is no hierarchy in my kitchen: everyone is paid the same, even me.”

Asma Khan has continued to support fellow migrants. In 2019, she set up a cafe in an Iraqi refugee camp in northern Iraq, employing Yazidi women who were recovering from life under Islamic State (ISIS). She volunteers with the global charity Action Against Hunger, and has founded the Second Daughters Fund, an initiative that aims to transform attitudes towards the birth of girls in India. And when Darjeeling Express had to close in March 2020 because of the global pandemic, she negotiated a deal with the landlord to allow a popular Syrian chef, Imad Alarnab, who had fled Damascus in 2015, to take over the remainderRestbetragremainder of her lease.Khan’s irrepressibleunbändig unbezähmbarirrepressible drive and passion for the enduringausdauerndenduring power of food make her a force to be to reckon with sth.mit etw. rechnenreckoned with. The restaurant moved to a stylish new home in Covent Garden last November, where her signatureunverkennbarsignature dishes continue to bring joy. In a 2019 interview with The Times of India, she recalls why she learned to cook all those years ago. “I found food was my way home when I moved to the UK,” she says. “The aromas and flavours of traditional dishes that I learned to cook from my mother transported me home.”

Top Tip: Make your own chai!

To make a rich, spicy masala chai, boil some black tea — Assam or Darjeeling — in milk and water, then add spices such as gingerIngwerginger, cardamom, cinnamonZimtcinnamon, nutmeg or a bay leafLorbeerblattbay leaf. Once you’ve made it a few times, you’ll discover the blendMischungblend you like best. Add cold milk and sugar to taste.