Remember “Happy”, the hit song by Pharrell Williams? throughoutim gesamten, hindurchThroughout 2014, this odeLobgesangode to happiness became a global phenomenon, with people around the world creating videos of themselves dancing and singing along to its cheerful melody. The videos, some from places like tsunami-ravagedverwüstet, verheertravaged Philippines and the war-tornvom Krieg erschüttertwar-torn Gaza Strip, seemed to show that happiness is a simple emotion uniting humanity.

Or so I thought — until I read the work of Tim Lomas, a psychologist at the University of East London, who has studied happiness in all of its cultural nuances through language. In his book The Happiness Dictionary, he has collected untranslatable words relating to well-being from different parts of the world.

Take sisu. Over the phone from London, Lomas tells me how he first came across this Finnish word — which the Finns use to describe courage and determination in the face of great adversityNot, Widrigkeit, Unglückadversity — while he was attending a conference. He’d met a Finnish researcher there, who told him that sisu was highly valued in her society. Of course, it’s a quality known to us all, but it was the Finns who created a word for it. They’d noticed that this particular state of being had gone to the very heart of their national identity.

“The talk strike homeins Ziel treffenstruck home,” says Lomas. “I chatted about it later with my mum. I thought of other examples, such as ‘nirvana’ and ‘karma’, which I’d come across while teaching English in China, words that didn’t fit into my frame of reference. I realized there was so much outside the horizons of our own experience and culture and language. I thought it would be so interesting to bring these words together.”

Psychology is very Western-centric. There are ideas and concepts in other languages that haven’t yet been expressed in English

Lomas’s dictionary takes a magnifying glassVergrößerungsglas, Lupemagnifying glass to the concept of happiness, walking us through the realmReich, Gefilderealms of contentment, pleasure, love, connection, appreciation, ambivalence, wisdom, spirituality and character development. Along the way, we find the Buddhist term dhāna — a state of intense focus, in which “the mind becomes a deep lake” — and the Australian Aboriginal word dadirri, which means “deep, reflective listening”. We discover words like yūgen, which in the Japanese language describes the sense of “the unfathomableunergründlich, unfassbarunfathomable depths of existence”.

Words like these take us on a journey to new emotional territory. “So much of that map is limited by language,” says Lomas. “Psychology is very Western-centric. A lot of the field is conducted internationally in English, which is very rich, but there are ideas and concepts in other languages that haven’t yet been expressed in English.”

Lomas distinguishes between Eastern and Western ideas of happiness. While the East is gearedausgerichtetgeared towards collectivism, the West tends to be more focused on individualism. Many of the German words in the book look deep into the self, articulating some very complex emotions. Lomas believes it’s an area that Germans are particularly good at, because of their philosophical traditions and the adaptabilityAnpassungsfähigkeitadaptability of their language, which lends itself to nuance. Take Wanderlust, for example, which perfectly to conveyvermittelnconveys a strong longingSehnsuchtlonging to to roamdurchstreifen, umherwandernroam the world.

Happiness seems to cover an empireReich; hier: weites Spektrumempire of feelings, ranging from euphoria to deep contentment. “Maybe we need another word,” says Lomas. “I think ‘happiness’ is universal, but it raises the question of what we mean by it. Maybe happiness can relate to what you’re feeling in the moment. But I prefer ‘well-being’ because it’s deeper and more meaningful. It gives life real depth.”

I ask Lomas the obvious question: has the study of happiness made him, well, happier? “Happiness is such an elusiveschwer fassbarelusive thing,” he says. “You can’t just make yourself happy. But writing about happiness has given me more to think about and notice in the world. Maybe it’s more a question of noticing and appreciating things. I pay more attention now.” 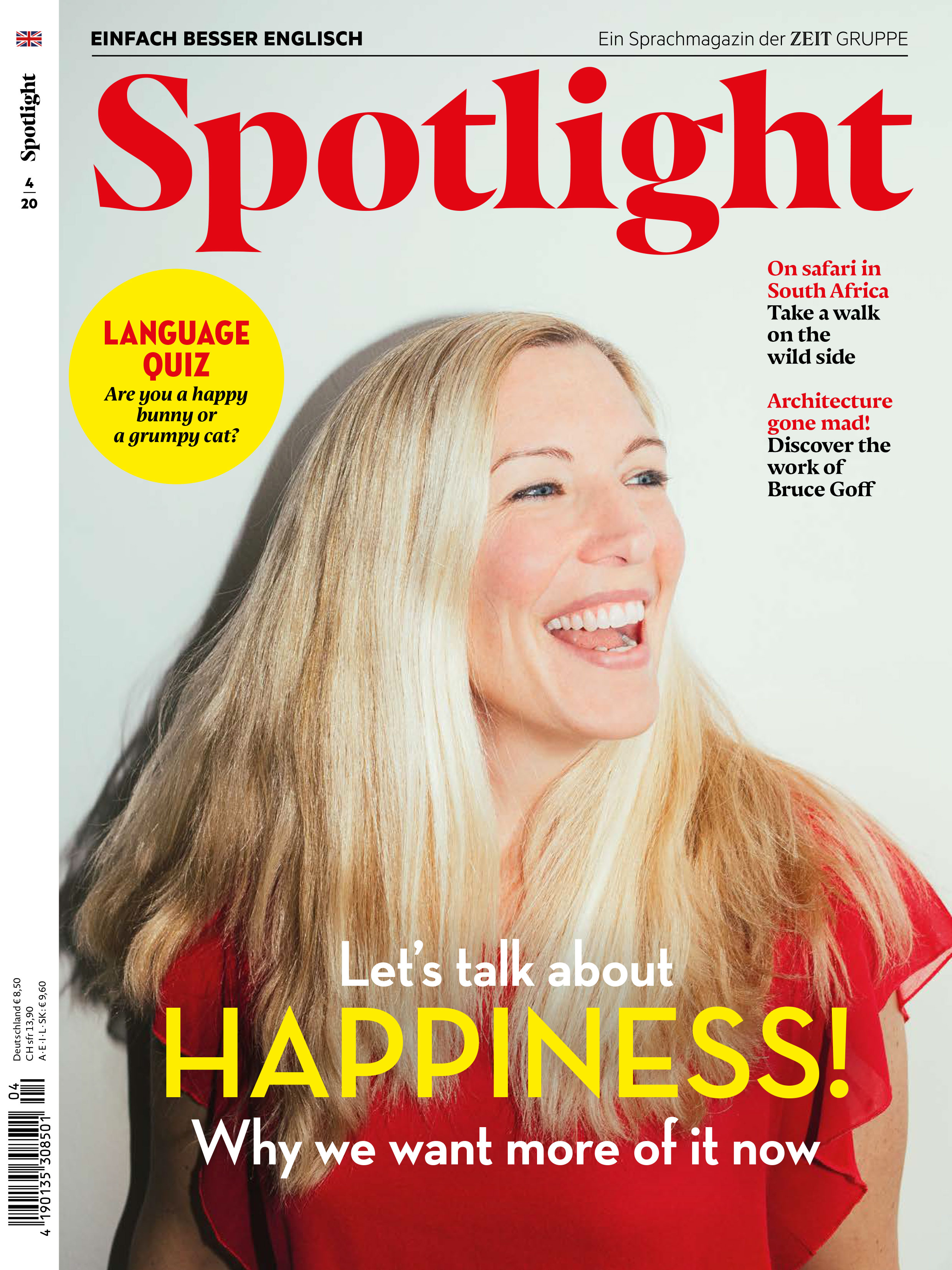