Europeans know Cuba as a place to vacation. They’re familiar with the island’s music, and they admire its old-world atmosphere.

Americans still can’t travel to Cuba as freely as their European cousins. However, Cuba manages to reach America in the most delicious way: through food.

Especially in Florida, it’s easy to find authentic Cuban cuisine. The state is home to the country’s largest Cuban-American population. Currently, there are around 1.5 million Cubans living in Florida who either emigrated from Cuba or can to tracezurückverfolgentrace their ancestryAbstammung, Vorfahrenancestry to the island.

The number of Cubans living in Florida who have either emigrated from Cuba or can trace their ancestry to the island.

There are hundreds of Cuban restaurants in the Miami area — too many, according to Teresa Alonso Diaz. That’s why she and Armando Diaz opened the Cuban Taste Restaurant 12 years ago in Port Charlotte on Florida’s west coast. The couple wanted to introduce Floridians to authentic Cuban cooking that goes beyond what dinerRestaurantbesucher(in)diners think they know.

“We have so many different dishes to enjoy,” she said. “The most popular is our roast pork. It’s served with rice and beans, along with Yuca, which is a root vegetable, or with plantain, a cooking banana.”

Yet, when most people go out for Cuban food, they order a Cuban sandwich. Many places all over Florida claim to serve the best sandwich around. However, they all have basic ingredients in common. Teresa Alonso Diaz describes a Cuban sandwich as made up of two types of ham, pork, Swiss cheese, pickleEssiggurkepickles, and mustardSenfmustard, which sit between thick slices of buttered Cuban bread. The sandwich is placed on a hot griddleBackblechgriddle until the bread is golden brown and the cheese has melted.

It upsets Diaz to hear people call it their favorite Cuban food: “That’s just fast food. Cuba isn’t identified with a sandwich. I try to have people try something different.”

Diaz may be right when she says the sandwich doesn’t represent her country. The Cuban sandwich’s origins are hard to trace. Historians like Dr. Loy Glenn Westfall believe the Cuban sandwich might have been a popular lunch food for people who worked at cigar factories during the 1860s in Key West.

Later, the cigar industry moved north to Ybor City, near Tampa, Florida. This is when we find the first written accounts of Cuban sandwiches, often referred to as mixtos because people used whatever meats they had on hand to make them. Tampa’s city council to designatebezeichnen, nennendesignated it as the city’s signature sandwich in 2012.

Andrea Gonzmart Williams’s family has run the Columbia Restaurant in Tampa for five generations. It’s one of the state’s oldest restaurants and was founded in Ybor City in 1905. The Cuban sandwich remains a best seller.

“It’s comfort foodHausmannskost, Wohlfühlessencomfort food,” says Gonzmart Williams. “It goes back to Cuban and Spanish immigrants and truly is a combination of different heritageErbe, Traditionheritages that have come to Ybor City. They used for it what they could find in leftoversÜberreste einer Mahlzeitleftovers.”

You have to have garlic, green peppers, tomatoes. There is cumin and black beans. These are the basis of many great dishes

For Gonzmart Williams, Cuban cooking comes down to the spices. At the heart of it is onion and garlic. In fact, the more garlic, the better.

“You have to have garlic, green peppers, tomatoes. There is cumin and black beans. These are the basis of many great dishes.”

Gonzmart Williams remembers being in the kitchen with her grandmother and her parents — all of them were wonderful cooks. She says these days, cooking has become very global.

“We have a very diversevielfältigdiverse family now with different backgrounds. Everything is to convergezusammenlaufenconverging. That gives it flair and I believe that’s the beauty behind cooking. You can combine different types of cooking and create something totally new.”

The home restaurants opened at a time when the government shut down regular restaurants because of food shortages. Today, paladares — mostly legal — are usually dining areas in a family’s home.

“They treat you like a king and queen. The taste is the best,” says Alonso Diaz.

Coffee plays an important part in the life of Cubans, wherever they are living. Cuban espresso is called cortadito, and having a coffee remains a very important social activity in Cuba.

For those of us who can’t travel to Cuba or Florida any time soon, Gonzmart Williams’ home-cooked yellow rice and chicken (Arroz con pollo) to hit the spotgenau das Richtige seinhits the spot.

“It’s nothing fancyausgefallenfancy,” he says. “It’s not expensive, but it gives you a feel for our cooking.”

Add a serving of rice puddingMilchreisrice pudding with sugar and cinnamonZimtcinnamon for dessert, and it’s a Cuban feastFestessenfeast, no matter where we call home. 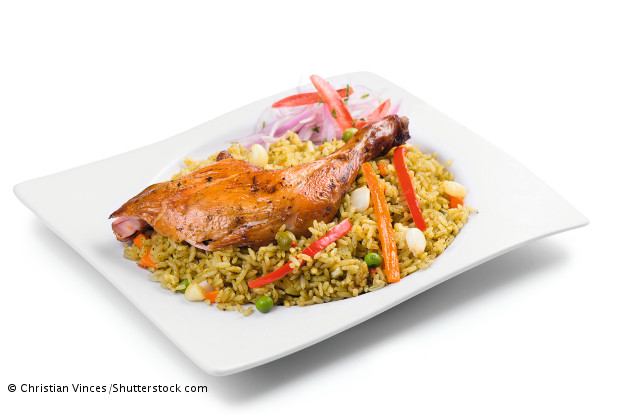 Preparation:
to grindmahlenGrind the saffron to create a powder. In a saucepanStieltopfsaucepan, heat chicken stockBrühe, Fondstock and add saffron. Allow saffron to to dissolvezergehen, sich auflösendissolve; keep warm until use. In a casserole, heat oil on the stoveKüchenherdstove and cook chicken until skin is golden brown. Remove chicken and set aside. In the same oil, to sautékurz im Fett anbratensauté onion, green pepper, tomatoes, and garlic until onion is transparent. to scrapekratzenScrape bottom of pan to loosen any chicken pieces. Add chicken stock, salt, bay leaf, and rice. Stir well. Return chicken to pan. Bring mixture to a boil, then cover and bake in oven at 200 °C for approximately 20 minutes or until chicken and rice are done. Pour over the wine and decorate with peas, roasted red peppers, and asparagus tips.