We have chosen three things for you to try that we think evoke the cold season in Britain. Make yourself comfortable, wrapped up warmly on the sofa, and enjoy!

One of England’s most magical landscapes, the Somerset Levels are among the largest wetlands in the country, an enormous area of waterloggedwassergesättigtwaterlogged fields and orchardObstplantageorchards bordered by ditchGrabenditches and dykeDeich, Dammdykes, which are known locally as “rhynes” (pronounced “reens”). Glastonbury Tor, a conical hill with the ruins of a church dating back to the Middle Ages at the top, is by far the best place from which to view the surrounding land.

This region is home to paganheidnischpagan and early Christian legends. The so-called Isle of Avalon is said to be the last resting place of the mythical King Arthur and has to capturefesselncaptured the imagination of generations of artists and writers.

To the west of Glastonbury, the Avalon Marshes, a vibrant area of pasturelandWeidelandpastureland, is paradise for birdwatchers. Come in midwinter to see the acrobatics of several million starlingStarstarlings that fly in from Scandinavia, to swirlwirbelnswirling in large black clouds over the Levels, before diving into the reed bedRöhrichtreed beds below. Conservationists have worked hard to restorewiederherstellenrestore the area as a bird habitat, to hand-rearper Hand aufziehenhand-rearing craneKranichcranes that will live in the wetlandFeucht-, Moorgebietwetlands. Wiped out by hunting more than 400 years ago, these beautiful birds, known for their trumpetingtrompetendtrumpeting callRufcalls and courtship dances, are now living wild in the area. 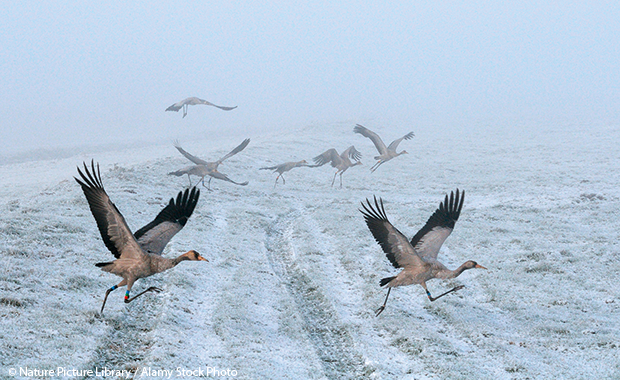 Make sure you try some smoked eelAaleel and cider, both local specialities. Stay in Wells, the smallest city in England, to nestlesich anschmiegennestling in the nearby Mendip Hills. Its Gothic cathedral is often described as the most poetic in England, and there is a farmers’ market on Wednesdays.

This tale is also ideal reading in the middle of winter. It tells the story of a dark king who lived through dark times. Henry Tudor, born in Pembroke, Wales, in 1457, became the founder of the famous Tudor dynasty, having to defeatbesiegendefeated Richard III at the Battle of Bosworth Field in August 1485. His victory ended the Wars of the Roses between the House of York and the House of Lancaster, which had divided Britain for 30 years.

Henry VII’s rule remained exposed to danger, however. It was undermined by plotVerschwörungplots, and there were enemies and pretenderjmd. der Ansprüche auf den Thron erhebtpretenders hiding round every corner. Henry was forced to use cruel tactics and spies to stay in power.

Henry’s reignRegierungszeitreign is remembered for the king’s strong foreign policy. His first-born son and heirErbeheir, Arthur, was married to Catherine of Aragon, allying Britain with Spain. Henry’s daughter Margaret married James IV of Scotland, thereby guaranteeing peace with Scotland. And Henry managed to form an allianceBündnisalliance with Maximilian I, the Holy Roman Emperor.

The king’s life, however, was full of tra­gedy. His son Arthur died of the “sweating sickness” at the age of 15,  and soon afterwards, Henry’s wife, Elizabeth, died in childbirth. The child died a day later.

What also comes to light through this book is Henry’s controlling and parsimonioussparsam, geizigparsimonious nature. He was always trying to gain more money through heavy taxes.

Some readers might find it irritating not to know what is the product of Penn’s imagination and what is historical fact. Nevertheless, the detailed and colourful anecdotes succeed in bringing the figure of the king to life.

Watch: The Man Who Invented Christmas

This biographical film deals with the life of 31-year-old Charles Dickens and his writing of A Christmas Carol, the most famous Christmas story of all time. After success with his earlier novels, Dickens has fallen on “hard(ish) times”. (His tenth novel was Hard Times — excuse the deliberateabsichtlich, bewusstdeliberate punWortspielpun.) He has been spending far too much money, his fifth child is on the way and his last three books have been flops. Dickens is under pressure to write a new work — and fast — to improve his ­finances. Despite being rejected by his publishers, he promises to have a new book written, printed and published by Christmas — only six weeks away.

After initial writer’s blockSchreibblockadewriter’s block, the characters from A Christmas Carol start to come to life and interact with Dickens. The writer overcomes his inner Scrooge and revisits the ghosts of his Christmas past, before forgiving his father and delivering a bestseller on time.

The film provides interesting insights into the author’s life. Many people, for instance, don’t know that, as a boy, he was abandoned by his family and forced to work in a “blacking” (shoe polish) factory. His father was sent to a debtors’ prisonSchuldgefängnisdebtors’ prison.

Dan Stevens provides a lovely portrayal of Dickens. With his sparklingfunkelndsparkling blue eyes and quirkyeigentümlich, sonder­barquirky energy, he is much like a young Gene Wilder. The Man Who Invented Christmas is a charming film to warm the chilliest of hearts on a cold winter’s evening.

The Man Who Invented Christmas will be in German cinemas from 22 November. 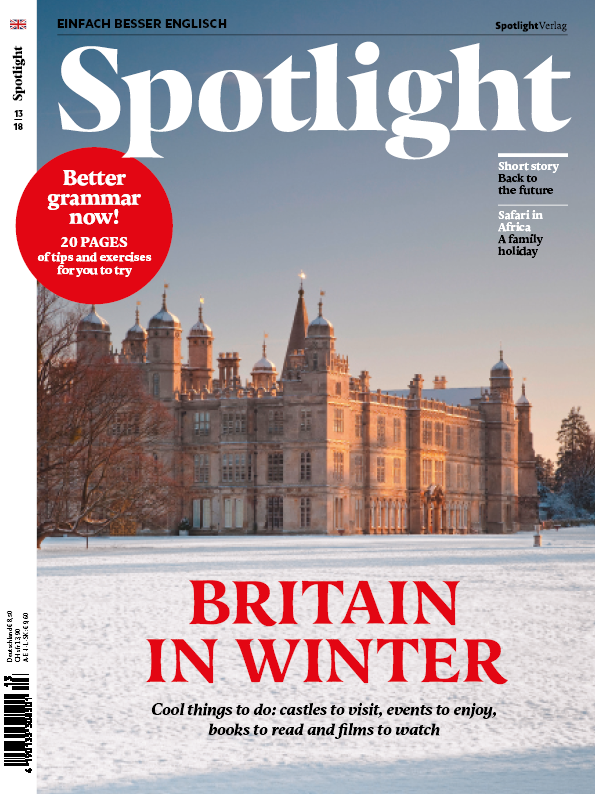