Right after World War II, when much of Germany to lie in rubblein Schutt und Asche liegenlay in rubble, the occupying forces to set outsich aufmachen, beginnenset out to denazify and reeducate the country. One of the most successful US efforts towards the latterletztere, -r, -sthe latter is still around today, in the form of the remaining Amerikahäuser or Deutsch-Amerikanische Institute (d.a.i.).

In 1945, after years of Nazi propaganda, America to seizeergreifenseized the opportunity to fill the information voidLückevoid. Instructed to “help lay the economic and educational foundation for a healthy German democracy,” the US Military Government opened a number of Information Centers. At the heart of these were libraries with a wide variety of American newspapers and magazines. Also offered were film screenings, lectures, exhibitions, concerts, and English classes. Young Germans to flockin Scharen kommenflocked to what were, in many cities, the first cultural institutions open to the general public after the war. The idea was to provide a fresh view of the world — and of America. The response was good, not least because these new centers were open to all. Everything was free, from the language classes to the receptions, where California wine flowed like water.

In 1953, there were 44 Amerikahäu­ser in Germany, with a combined budget of $3 million. All were run by the United States Information Agency (USIA), which was tasked with to advocatevertretenadvocating US policies abroad. The Amerikahäuser were important to this mission, as were radio stations such as Radio Free Europe and Voice of America. As early as the late 1940s and early 1950s, the Amerikahäuser became increasingly sophisticatedanspruchsvoll, intellektuellsophisticated, treating the public to readings by some of the finest US writers, including T. S. Eliot, Thornton Wilder, and William Faulkner. Exhibitions by America’s leading contemporary artists added to the glamor of the Amerikahäuser in those years, as did theater, film, and music.

Voices critical of US foreign policy made themselves heard, however, especially during the Vietnam War era. Many Germans saw the Amerikahäuser as being instruments of propaganda for the US government, which, to a certain extent, they were. Soon, they became places where protesters liked to hand out leafletFlugblatt, Zettelleaflets or interrupt lectures about politics.

When the Berlin Wall came down in 1989 in what one author called “the end of history,” American foreign policy underwent a paradigm shiftWechsel, Wandelshift. With the Cold War effectively over, the Amerikahäuser were no longer so key. By 1997, the USIA’s version of public diplomacy had come under fire, too: It had a budget of more than a billionMilliarde(n)billion dollars, and Congress came to see this as a waste of US taxpayers’ money. The decision was made to to dissolveauflösendissolve the agency altogether. The Amerikahäuser in Germany were to be slated for closure (N. Am.)soll geschlossen werdenslated for closure.

But it wasn’t “the end of history” for all of the Amerikahäuser. While most of them did shut down in the late 1990s, some survived, either as foundations or nonprofit organizations with varying forms of sponsorship, such as private donationSpende, Schenkungdonations, membership feeGebührfees, or German tax money from the respectiveentsprechend, jeweiligrespective cities or states. As a result, the surviving 10 Amerikahäu­ser are quite different from one another, varying greatly in size and focus.

What they are called has to evolvesich (weiter-)entwickelnevolved, too. There are now several Deutsch-Amerikanische Institute (d.a.i.); Freiburg has the Carl-Schurz-Haus, named after a prominent German-born US senator; and Heidelberg’s former Amerika-Haus is now the Haus der Kultur, which no longer focuses on America only, but on all world cultures instead. Some of these “houses” lacknicht haben, vermissen lassenlack a physical presence, and are therefore primarily virtual places of exchange on transatlantic topics. In the case of Berlin, both the actual building and the name have survived. But this “Amerikahaus” is in fact no such thing: Instead, it is a privately owned art gallery called C/O Berlin. “Amerikahaus” is merelynur, bloßmerely part of its address, as it helps people to identify the location more readilyleichtermore readily.

The role of Amerikahäuser today 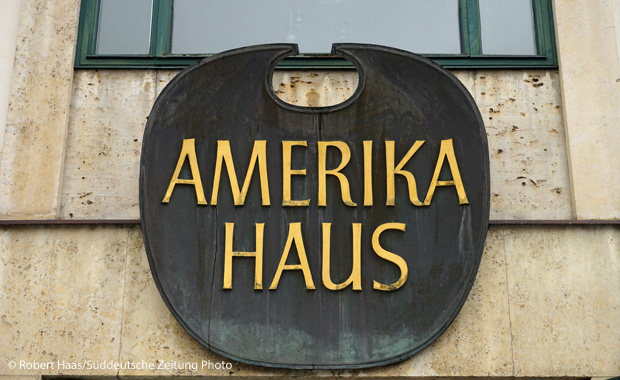 So what’s the point of an Amerikahaus today? One of the best examples is in Munich. Its first temporary home after the war was the former “Führerbau” on Arcisstraße. In 1957, it moved a few hundred meters away, to Karolinenplatz, into the first purpose-built Amerikahaus in Germany. The new headquarters featured a cupolaKuppelgewölbecupola meant to echo the dome of the Capitol Building in Washington, DC, and an open foyer that was considered democratic architecture at its best. A few years ago, it wasn’t clear whether the Amerikahaus would be allowed to stay at its current address, a primeerstklassigprime location close to the center of town. But the people of Munich protested the move so passionately, even demonstrating in the streets, that in the end, the decision was made not only to keep the Amerikahaus, but also to invest in modernizing it. The idea is to create a new center for the development of transatlantic relations.

Munich’s Amerikahaus, which is currently undergoing full-scaleintensiv, umfassendfull-scale renovation, has a multifacetedvielfältig, facettenreichmultifaceted mission. The most accessible part of it for the public is its cultural program of concerts, readings, and exhibitions. According to Meike Zwing­enberger, its director, the exhibitions, in particular, attract even those for whom transatlantic topics are of little concernhier: Interesseconcern.

An English language class alone will not create an interest in another culture. You have to find other ‘door openers’ and build bridges

Networking is also a keyhier: wesentlich, entscheidendkey function: The Bayerische Amerika-Akademie, which supports scholarStudierende(r), Gelehrte(r)scholars researching the US, is part of the center. Offering guidance to German students who want to study for a semester or two at an American university falls under the purviewReichweite, Einflussbereichpurview of this Ameri­kahaus, too, as does its role as a research and information center for high-school students and teachers.

“Our charterSatzungcharter states that we contribute to international and transatlantic understanding through political discussion and cultural events,” says Zwingenberger. “There is a strong continuity here, but there is also a shift in issues, and you have to to adaptsich anpassenadapt to new formats. We try to work with young people who are, on the one hand, very Americanized through TV shows, but who, on the other hand, don’t have a real awareness.

“It’s not enough to offer an English language class. That alone will not create an interest in another culture. You have to find other ‘door openers’ and build bridges. So digital education helps a lot here. We also try to to appealansprechen, gefallenappeal to a younger audience by having food trucks catering our events, or staging graffiti workshops.”

“Rent an American” in Tübingen

Reaching out to young people is also how the d.a.i. Tübingen tries to build bridges across the Atlantic. Founded in 1952 in the French zone, it is today one of the most active former Amerikahäuser. In addition to its cultural program, language classes have long been a main focus. The organization also offers summer youth camps and travel programs. Their “Rent an American” program sends American exchange students to visit schools in and around Tübingen. They share stories about life back in the States, an excellent way of turning ordinary young Americans into cultural ambassadorbotschafter(in), Gesandte(r)ambassadors.

“It’s not always easy in a university town like Tübingen — which is considered progressive and leftist — to find a place for our topics,” says Ute Bechdolf, director of the d.a.i. Tübingen. “But everyone should to get one's sayzu Wort kommenget their say, also the critical ones and those posing uncomfortable questions. [to safeguardgewährleisten, schützenSafeguarding] diversityVielfaltdiversity is my big concern.”