It’s summertime, and in Germany, people are enjoying their favorite beer gardens. Munich brewerBierbrauer(in)brewers are often to credit sb. with sth.jmdm. etw. zuschreibencredited with having invented them in the early 19th century, which may explain why drinking beer outdoors is especially popular in Bavaria. Initially, brewers could produce their beer only in the winter because of a lackMangellack of refrigerationKühlungrefrigeration. However, after building cellars along the River Isar in Munich — adding gravelKies, Schottergravel on top of them and planting chestnutKastanien-chestnut trees for shade — brewers were able to keep their product cool enough to serve fresh year-round.

Plenty of visitors consider Bavaria and its historic breweries to be the best place in the world for beer (although fans of Belgian beers may have a thing or two to say about that). But microbreweries from abroad are now venturesich wagenventuring into the German market, too. US-based Stone Brewing opened its restaurant and beer garden in Berlin’s Mariendorf neighborhood three years ago and now brews several kinds of beer on site.
Spotlight spoke to Thomas Tyrell, Stone Brewing’s brewmaster in Berlin, about why it took guts (ifml.)hier: Mutguts to launcheinführenlaunch US beers in Germany, and how the beer-garden tradition thriveflorieren, gut gehenthrives at their location.

Why did Stone Brewing decide to make the leapSprungleap from the US to the German market?
Stone Brewing was founded by [American entrepreneur] Greg Koch in the mid-1990s. That was a horrible time for beer in the United States. I don’t think we here in Germany can even imagine how direschlimm, düsterdire the situation was for beer drinkers. Mr. Koch decided to brew a beer that didn’t taste like water. He started in his San Diego garage, and the business grew tremendouslygewaltig, ungeheuertremendously. Stone Brewing is now among the  top ten largest craft-beer brewers in the United States.
Koch wanted to bring his beer to the European market, and quickly realized fresh beer doesn’t travel well. It needed to be brewed here, so that customers could appreciatewürdigen, schätzenappreciate its taste. He considered more than 130 different possible locations for this brewery and to settle on sth.sich für etw. entscheidensettled on Berlin. 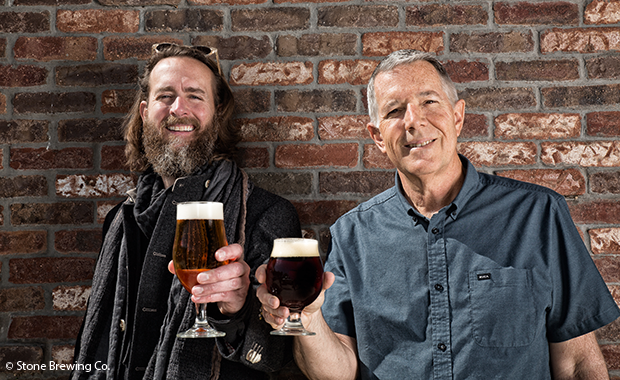 How do Germans react to a US beer? Do they accept it?
It’s true that, initially, we wanted to provoke a bit of a culture clashAufeinanderprallen der Kulturenculture clash. Some people even asked us, why are we “carrying sand to the beach”? They didn’t think an American beer was wanted or needed on the German market. But others did recognize that there’s been a quantum leapQuantensprungquantum leap among American brews.
Our beers are creative, and we try to bring out nuances of barleyGerstebarley and maltMalzmalt that many beer connoisseurKenner(in)connoisseurs didn’t even know were possible. We have now shown our brewery to 20,000 people who have done a beer tasting here. Some are impressed right away. Others don’t like it, but come back a couple of years later and realize our product is something special.

Is it a matter of overcoming misconceptionfalsche Vorstellungmisconceptions about American beer?
Yes. Most Germans believe American beer is lager. However, we brew something completely different. For the most part, we specialize in IPAs: that’s an India Pale Ale. This type of beer was brewed by the British hundreds of years ago because of its high alcohol and hopHopfenhops content, which made it last a long time. It’s interesting that US craft brewers have reinvented how hops are used during the brewing process. I don’t think we’ve yet discovered all that is possible, and we can play with many more variations.

How do you explain Biergarten culture to an American or British visitor?
We have a very large beer garden here, where we combine our brews with a cuisine that’s inspired by the world. It’s not the type of beer garden that you know from Bavaria, with benches. Instead, the proportions are more generousgroßzügiggenerous, and that’s what makes it beautiful. You just feel welcome, and are away from your daily routine and stress.

What’s makes a Biergarten visit perfect?
I think the weather is crucialausschlaggebendcrucial. It shouldn’t be too cold or too windy. It shouldn’t be too warm or too sunny either. And it’s important to be surrounded by people you really like. The perfect beer, then, is like ato add the cherry to the cakedas Sahnehäubchen aufsetzendding the cherry to the cake. Personally, I like an IPA, and have a heartyherzhafthearty salad with it. I also enjoy a good steak.

Do you get a lot of international visitors to your beer garden?
We do get a lot of people from the ­United States, Britain, and Scandinavia. Many of them are familiar with Stone Brewing and our products. However, most of our beer-garden visitors are from right around here. Our beer-garden culture is a little different from that in southern Germany, but I would say that for about 70 percent of our visitors, we are their neighborhood beer garden.

The world of beer is competitive. What will it take to stay on top?
I think our executive chairmanVorstandsvorsitzende(r)executive chairman, Greg Koch, and our president, Steve Wagner, continue to come up with ideas and have a vision that keep us at the forefrontSpitzenpositionforefront of this business. Koch never waited for consumer-based tasting results. He just brewed the beer he liked to drink. We kept this philosophy. Many people may not yet know that they like our product. But when they come to Berlin and try our beer, they are usually impressed. 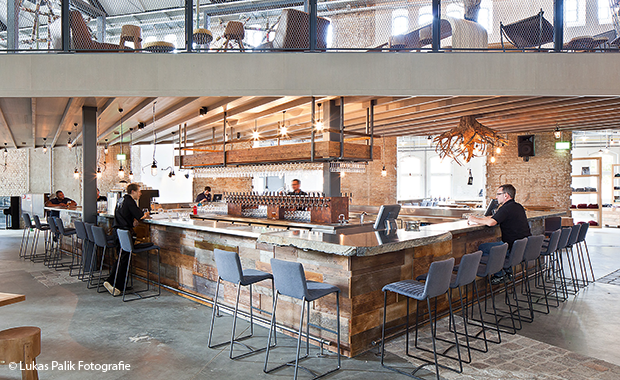 How much beer do you brew here in Berlin, and where does it go?
We brew about 45,000 hectoliters a year. That’s about 38,000 barrelFassbarrels. But we have an annualjährlichannual capacity of about 150,000 hectoliters. Right now, we send our product to 26 different countries. They include Austria, Ireland, Norway, Italy, Spain, and even Russia. We have eight beers we offer year-round, but we also do seasonal brews for the holidays. However, we don’t go for quantity. We want to make sure the quality of our beers is outstandinghervorragend, herausragendoutstanding.

What are some of your most popular beers?
The Arrogant Bastard. The creation of this beer was an accident, because we didn’t intend to brew it. Its taste ended up being so intense that we all had the feeling it was bordering on arrogance. That’s how it got its name. Then there are our pale ale Ripper, White Geist Berliner Weisse, and various IPAs. They are also favorites.

Stone Brewing is located at Im Marienpark 23 in Berlin’s Mariendorf neighborhood. It stands on the site of a historic gasworks facility. There are daily 45-minute tours in German and English (costing €5), which include a guided beer tasting.

Beer’s main ingredients are water, barley and hops. How much variation can there be to influence flavors?
There’s so much we don’t know yet. For decades, we tried to grow hops as efficiently as possible, and hops are considered to be what gives the beer bitterness. US craft brewers changed all that, and discovered there are many aroma variations when you add the hops later in the process. Many questions remain. For example, how do different types of hops vary the aroma? This research dates back only about 20 years, and European hop growers to lag behindhinterherhinkenlag far behind their US colleagues. It’s really exciting because, every year, they grow two to three new types of hop. But it takes at least another six years before you can use the hops to brew beer with.

Why is your label dominated by a gargoyleWasserspeier­gargoyle?
When you look at historic brewing buildings, and even churches, you often see a gargoyle on the roof or facade. We consider them to be a type of patron saintSchutzheilige(r)patron saint. Legend has it that all evil will be turned away by these ugly little creatures, because evil can’t face that type of ugliness. Our gargoyle isn’t particularly beautiful either, but he has pure intentions, and he certainly protects us from bad beer.