On this road trip, I’m going to enjoy the sceneryLandschaft​scenery along Ireland’s west coast, where white sandy beaches and toweringhoch aufragend​towering cliffs welcome the breakerBrandungswelle​breakers of the vastweit, unermesslich​vast Atlantic Ocean. I’ll be travelling along one section of the Wild Atlantic Way, a 2,600-kilometre-long coastal route that runs the length of Ireland’s west coast. Officially to launchhier: eröffnen​launched in 2014, the route was designed to encourage visitors to explore Ireland beyond the attractions of the capital city, Dublin.​

I drive out of Limerick on Ennis Road, headingin Richtung nach​heading north-west, and cross the border from County Limerick into neighbouring County Clare. With some of the finest scenery to be found on the west coast, Clare also has a lot of evidence of early human activity. Bones of a bear, found in a caveHöhle​cave here in 2017, show linear cut-marklinienförmige Einkerbung​linear cut-marks that were almost certainly made by humans in the Palaeolithic PeriodAltsteinzeit​Palaeolithic Period around 10,500 BC.​ 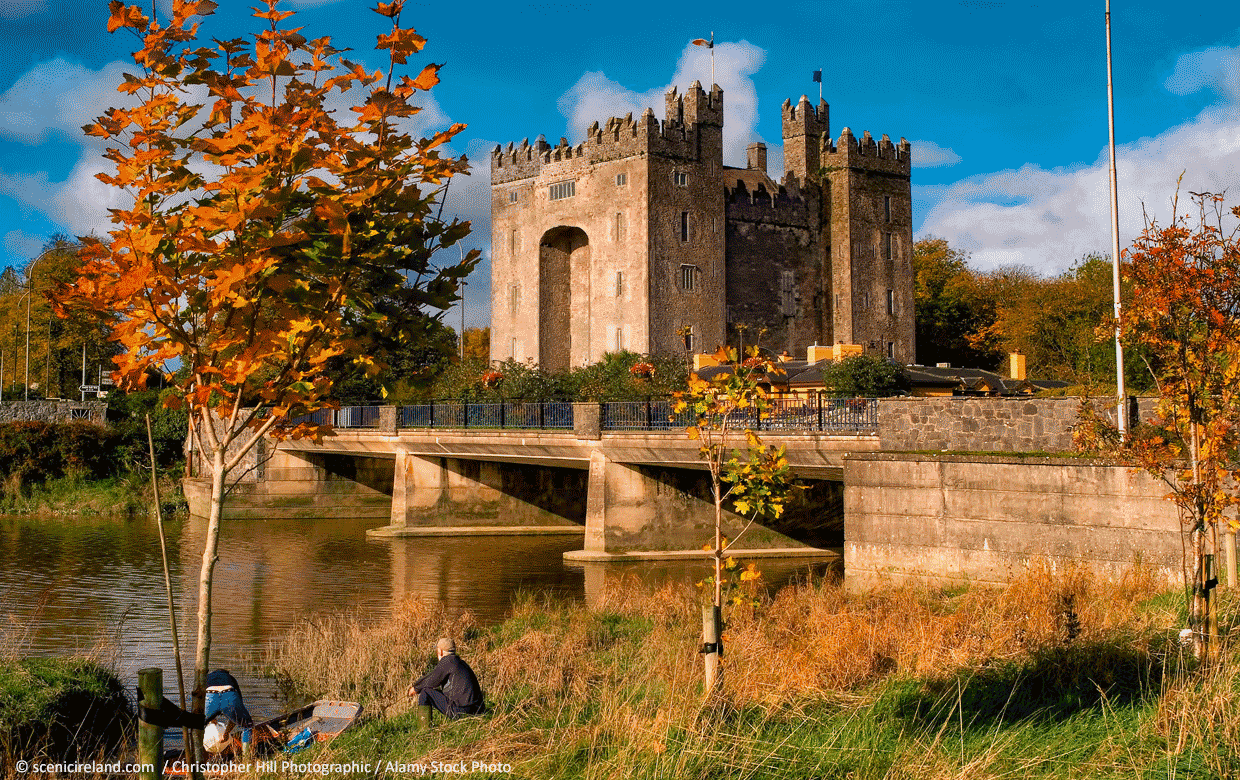 To the tip of a peninsula​

My first stop is Bunratty Castle and Folk Park, a 15th-century castle and a living 19th-century village. A long-established, much-visited tourism centre (the number of coach (UK)hier: Reisebus​coaches in the car park is a telltale signuntrügliches Zeichen​telltale sign), this well-run facilityAnlage​facility may be a little too “touristy” for some tastes, but is still worth a visit.​

Original examples of local, traditional architecture have been rebuilt in the village, giving an insight into how people lived in centuries gone by – like an open-air museum. The Cashen fisherman’s house, a simple, two-room home of a north Kerry salmonLachs​salmon fisherman, is my favourite because of its simplicity. Much of the timber (wood) used in this house would have been to salvageretten​salvaged from the sea, and the floor is of “rammed”, or compressed, clayTon, Lehm​clay.​

My next destination is the county town of Ennis. It lies on the River Fergus, which runs into the Shannon Estuary. This is the largest town in County Clare, and it’s a strongholdHochburg​stronghold of traditional Irish music – as are many other towns and villages in the county.​

My route now takes me south-east, through farmland, towards the Loop Head peninsulaHalbinsel​Peninsula. Here, vistaAusblick​vistas open up, and as I drive south from the village of Kilkee, I begin to see the power of the Atlantic Ocean to my right, where huge cliffs stretch as far as the eye can see. thronen​Perched at the very tip of the peninsula stands the Loop Head lighthouseLeuchtturm​Lighthouse.​

There’s been a lighthouse here since the year 1670. At first, it was just a coal-burning fire on the roof of the cottage where the lightkeeperLeuchtturmwärter(in)​lightkeeper lived, and the first tower lighthouse was built in 1802. One of west Clare’s most impressive sights, and open to the public, this provides an ideal viewing point for a place so dramatic that it was chosen as one of the locations for the film Star Wars: The Last Jedi.​ 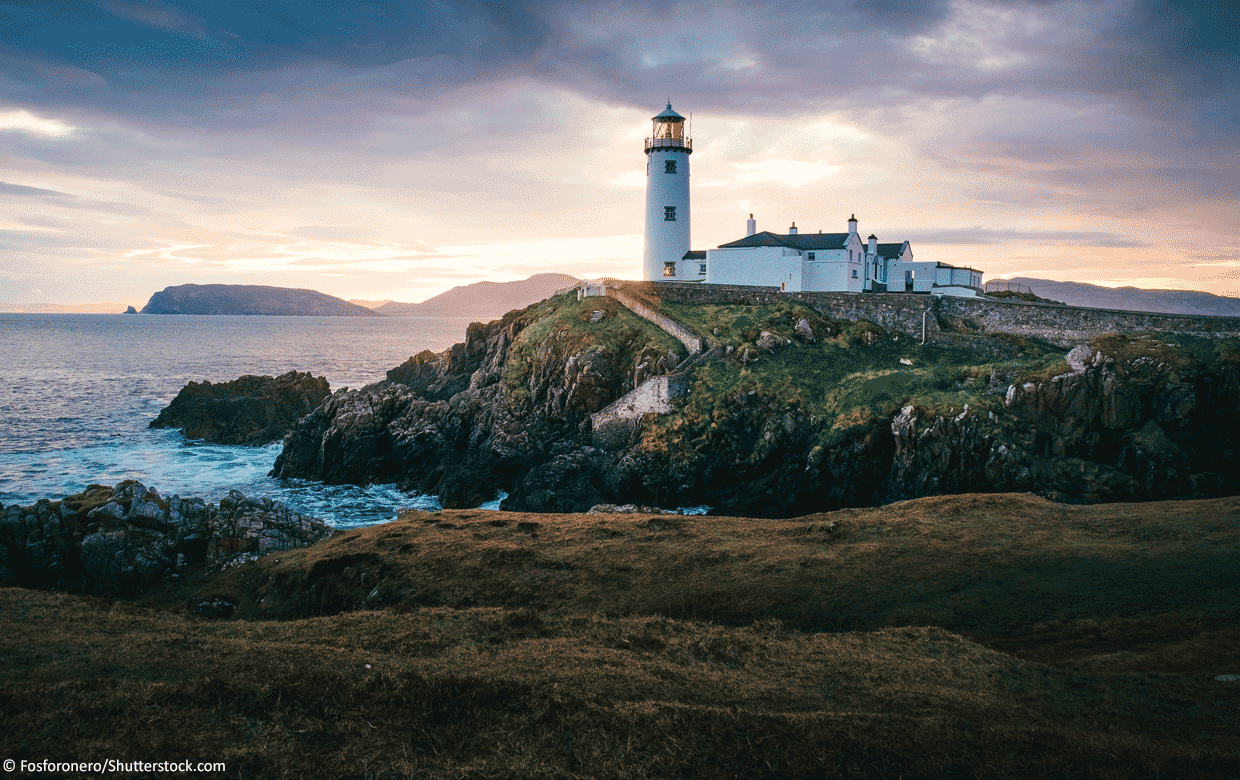 The ocean on one side is wild​

Back in the car and bracederfrischt​braced by the stiff ocean wind, I’m heading back north now and the breathtakingatemberaubend​breathtaking vastness of the Atlantic is becoming more familiar. After passing through Kilkee again, I head towards the neathier: hübsch​neat little village of Doonbeg, where it’s time for coffee and a sconeTeegebäck​scone in the aptlypassenderweise​aptly named Wild Atlantic Break cafe.​

In addition to its two fine beaches, Doonbeg is well known as the location of a golf club owned by former US President Donald Trump. Many in Ireland have ambivalentzwiegespalten​ambivalent feelings about this – but it’s hard to argue with locals who point out the employment opportunities the club has created.​

My next destination is Spanish Point, another small resortUrlaubs-, Erholungsort​resort with a beautiful sandy beach. After violent storms to disrupt sth.etw. stören, zum Erliegen bringen​disrupted the planned invasion of England in September 1588, the Spanish Armada was driven north around Scotland and then south along Ireland’s west coast. Over a thousand men lost their lives when one of the many galleons was to wreckauf Grund laufen​wrecked off the coast here at Spanish Point – hencedaher​hence the name.​

Driving north-east, I soon come to Miltown Malbay. Traditionally a place where local farmers brought their grainGetreide​grain to be to millmahlen​milled, three of the town’s corn mills can still be seen. But today, Miltown Malbay is best known for its singers, dancers and musicians. A week-long festival to celebrate the town’s most famous son, the Irish piperhier: Dudelsackspieler(in)​piper, fluteFlöte​flute and whistlehier: irische Blechflöte​whistle player Willie Clancy, is held here each year in July.​

If you arrive here at any time between May and September, as I have, the West Clare Music Makers’ Visitor Centre is an easy way to get a sense of what it’s all about. The eight-minute film on the stories behind the music provides an appetizer for those who like the sound of the Irish uilleann pipes (the national bagpipeDudelsack​bagpipe of Ireland).​