Journalist Lorraine Mallinder has travelled all over the world reporting on stories as diverseunterschiedlichdiverse as Hungarian rap music, civil warBürgerkriegcivil war in Cameroon and making maple syrupAhornsirupmaple syrup in Canada. Recently, she travelled to Iraq to research topics for the BBC and The Irish Times. While there, Lorraine recorded her experiences for Spotlight in the form of a log. You can read her first entry in the current edition of Spotlight and listen to her reading the log now. You’ll find the other five logProtokolllog entries in upcomingkommendupcoming editions of Spotlight Audio.

Day one in the city of Erbil, in the Kurdistan region of Iraq

Hello, and welcome to the first instalmenterste Folgefirst instalment of my reporting log. So, I got here yesterday and I’m still getting acclimatized. It’s been in the mid-40s all day, a very dry heat. And, I have to say, looking out my hotel window right now, the functional concreteBetonconcrete buildings that are typical in this part of the world all look kind of parchedausgedörrt, staubtrockenparched. There’s a guy outside selling rows of chickens roasting on a multi-layered spithier: Bratspießspit, the flames glowing orange – yet he seems as cool as a cool as a cucumbervöllig ungerührt, seelenruhigcucumber! 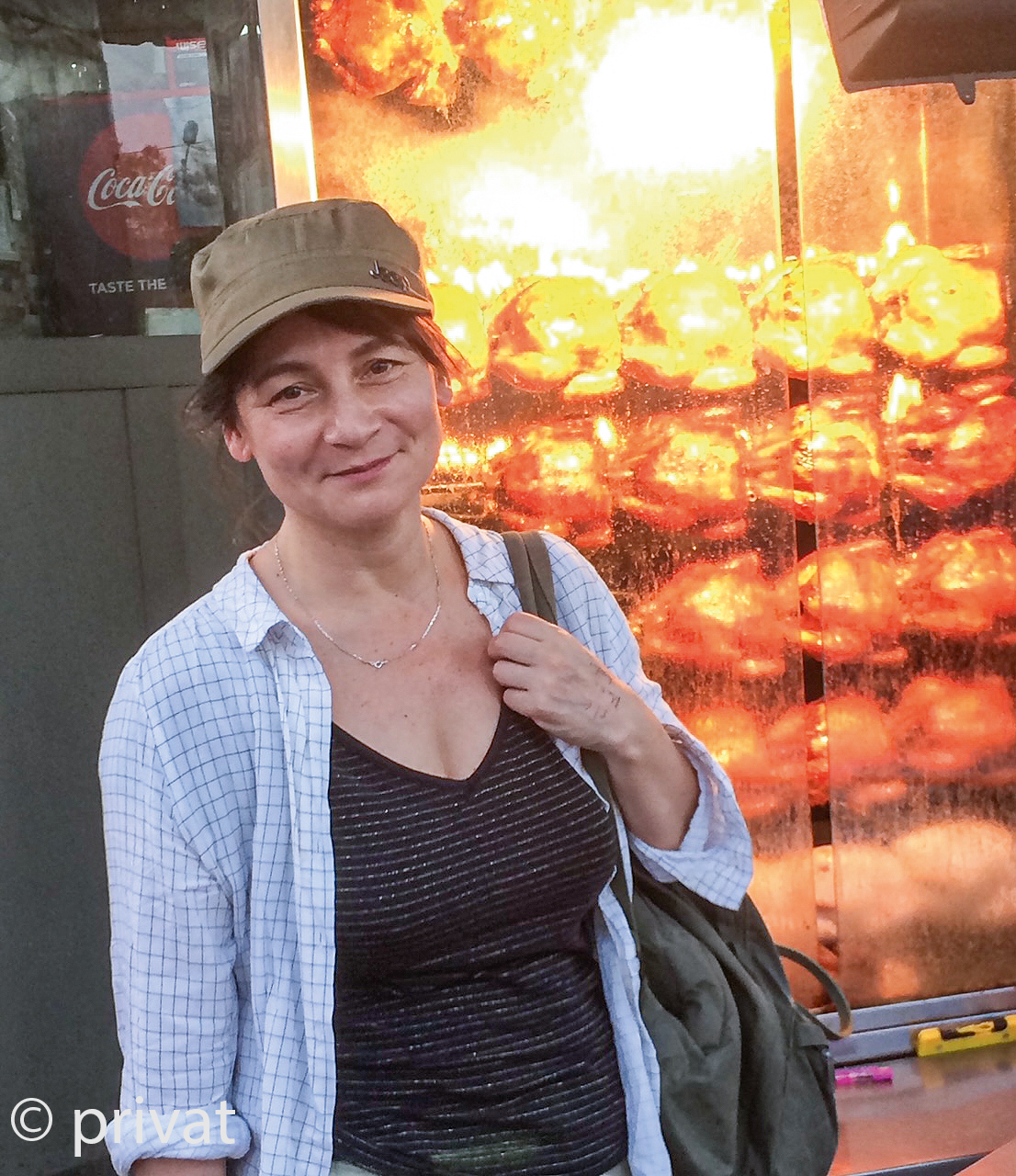 The guy in the hotel lobby said that a couple of weeks back, it was in the 50s. So, Iraq, Kurdistan, like a lot of countries we’ve been seeing in the news, is having a very long, hot summer. There’s a real water shortage here, too, and lots of power cut (UK)Stromausfall, Strom­abschaltungpower cuts owing to sth.aufgrund von etw.owing to the intense heat.

So, what have I been up to today? It’s mainly been a day of research, calling contacts, drinking lots of tea in the hotel lobby. There’s this stereotype of the foreign reporter who goes to cover conflicts in faraway places, but never really to venturewagen, sich trauenventures beyond the hotel lobby, which does come to mind here. But seriously,

I’ve to bump into sb.jmdm. zufällig begegnenbumped into some really interesting characters in the lobby of this particular hotel, who’ve given me some really invaluable tips for stories.

Like last year, for example. I was here in February, planning a trip to Mosul, which is Iraq’s second-largest city. Islamic State were here between 2014 and 2017. And I wanted to go and see how people were dealing with the aftermathFolgenaftermath. It was a fairly risky trip, partly because of all the militias in the city. But I’d organized everything beforehand with an NGO – that’s a group doing aid work there – who were going to get me in the city and put me up in their safe house. However, on the day before the big trip, they to pull outeinen Rückzieher machenpulled out, leaving me in the to leave sb. in the lurchjmdn. im Regen stehen lassenlurch. I was kind of gutted (UK, ifml.)sehr enttäuschtgutted because it had [basically] been the main purpose of the visit. However, later that day, I bumped into someone in the hotel lobby, the famous hotel lobby: an Iraqi American businessman who was setting up a business in Mosul and offered to get me in.

“You’re gonna love it, Loreen,” he kept saying to me, as if we were going on a trip to Disneyland.

It turned out to be a great trip, producing some stories for the BBC and The Irish Times.

Anyway, that was back in February last year. And I haven’t been anywhere since. Because, well, like everyone else, I’ve been in lockdown land. So, this is my first foreign reporting trip in what feels like ages. I’d be lying if I said I don’t feel some trepidationBeklemmung, Angsttrepidation. I feel a little bit out of practice.

There’s a definite knackTalent, Fertigkeit, Trickknack to foreign reporting. You arrive in a faraway place and you have to find your to find one’s bearingssich zurechtfindenbearings very quickly. Your eyes need to be wide open. You’re gathering a lot of information in a very short period of time. Communication is sometimes an issue. In Mosul, I’d found a very eruditegebildeterudite university professor whose translations had a real sense of nuance. Generally, with interpreterDolmetscher(in)interpreters, I to tone downabschwächentone down my Scottish accent and often end up repeating questions in different ways to get to the heart of the matter.

I’ve got my eye on a few areas that I want to write about while I’m here. I’ve already pitched some stories – a “pitch” is when you contact a publication with proposals for story ideas.

I want to write about the Yazidi women who were to enslaveversklavenenslaved by Islamic State. The Yazidis are a religious minority in northern Iraq who’ve been to houndjagenhounded and to persecuteverfolgenpersecuted for centuries. Over 6,000 Yazidi women were taken to take sb. captivejmdn. gefangen nehmencaptive by Islamic State, and around half that number are [still] to be unaccounted forvermisst werdenunaccounted for.

It’s actually thought that many are imprisoned along with Islamic State members in a prison camp in Syria – the victims imprisoned with their captor Geiselnehmer(in)captors. So, I definitely want to follow that up.

Other than that, I have a couple of political stories. One on the clan rivalries in Kurdistan – that’s quite a dramatic story, with a sort of Game of Thrones dimension.

There are also elections coming up in Iraq in October, which will be hugely interesting – not least because of all the anti-corruption protests that kicked off in 2019, [when] a lot of young people went out on the streets. The elections are definitely a major part of the backdropHintergrundbackdrop to this visit.

My time here is limited, just over a week. I have a lot to cover.
So, the clock is ticking! I’d better get on with it!